200 Fifth Avenue was formerly known as The Toy Building and is currently home to Eataly as well as the corporate offices of Tiffany & Co among others. But, before The Toy Building was built in 1909, the site had several former (and wildly different) lives.

The site that would become the Fifth Avenue Hotel was once the location of “Madison Cottage” which served as a stagecoach stop for passengers headed north from the city.

From 1853 to 1856 it was replaced by Franconi’s Hippodrome, a multi-tent structure of canvas and wood that could accommodate up to 10,000 spectators. They watched “amusements of the ancient Greeks and Romans.” 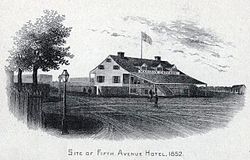 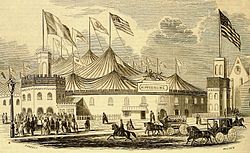 The Fifth Avenue Hotel was built in 1856–59 by Amos Richards Eno. It cost $2 million, and, at the time, was so far uptown that it was dubbed “Eno’s Folly”.

The elegant hotel became a popular hangout for New York City’s social and cultural elite. It was highly profitable and spurred development in the area (including the infamous Flatiron Building).

The hotel had many unique offerings for the time, including private bathrooms and the second successful passenger elevator ever developed!

U.S. Presidents who stayed or lived at the hotel include Grant, Garfield, Hayes and Arthur.

Eventually the center of Manhattan had moved north of Madison Square Park and the hotel’s owners (the Eno family) decided it would be more valuable if the property was developed as a skyscraper. In 1907, they announced they would build a $10 million, 24 story office building on the site as soon as the lease to the hotel expired the following year. The hotel closed at midnight on April 4, 1908.

Learn more on our Flatiron Food, History & Architecture Tour that takes place Thursday and Saturday at 10:30am.