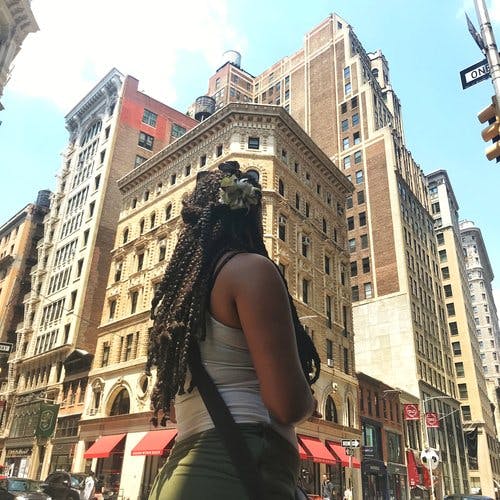 We are so pleased to share this great write-up on our Flatiron Food Tour by Roaming Nanny. Full article here.

Our tour met up in the Flatiron district at 10:30 sharp. Rory, our tour guide, was there early to meet up with us all and I liked her instantly! Upon further investigation – Rory I swear I’m not a stalker, but think we should totally be friends – I found out that she was voted one of the best tour guides in New York. Get it girl! She is one of the best guides I’ve had in a very long time. Knowledgeable and fully of energy, if you get Rory for a guide, you’re sure to have a wonderful time.

Our first stop was Eataly. While many of you might be shocked by this, I had never heard of it before. Now that I have, I wish there was one down the street from my house! For those of you who are just hearing about it, Eataly is and  Italian marketplace full of cafes, counters, and restaurants. Apparently they even have a cooking school. This place is huge. I don’t even want to imagine what it’s like when it gets busy.

Not only did Rory show us around and point out some of the most delicious things to eat, she told us about the building itself. It used to be a toy store and many of the original features of the building were rediscovered when Eataly moved into the space.

We got to try some fresh breakfast focaccia while we were there too. The blueberries were so good, they could have been picked that morning! While were were there Linda and I also picked up from fresh mozzarella, a baguette that came out of the over hours earlier, and some thin sliced sopressata. Later in the day we walked over to the High Line and had it for a snack. Then we finished it off for dinner!

A short walk past the Lego store and down the street we stepped into Eisenberg’s. A New York staple since 1929, Eisenberg’s is a small sandwich shop with big character. When you go inside, it doesn’t look like much with it’s bar top to the left and celebrity photos lining the wall on the right, but trust me on this. Sit down and order a pastrami on rye and a lime ricky. Make sure you use plenty of mustard. And you’ll probably need a napkin.

On the way to Beecher’s Cheese we walked through Madison Square Park and down East 20th Street. Being a History and Architecture tour as well as a Food tour, Rory knew so much about the neighborhood’s history and the design of the buildings. We even walked by President Theodore Roosevelt’s birthplace. Linda and I went back after the tour was over. It’s gorgeous inside!

Back to Beecher’s. Opening in 2011 after the success of their original location in Seattle’s Pike Place Market, Beecher’s makes cheese right at their location in the Flatiron District. Beecher’s Clothbound Cheddar has been named the Best Cheddar in America twice, and when you have cheddar that good you need to make grilled cheese with it.

Sadly, the last stop on the tour, because I wasn’t ready to stop eating, was Bread’s Bakery. Here I got my chocolate fix! When we walked into Bread’s it was chaotic heaven. People everywhere. It smelled like chocolate and fresh bread. I was a happy girl.

A lovely man gave me a sample of babka, a buttery, in this case chocolately, eggy cross between bread and cake. I obviously bought one. My boyfriend loved it so much it was gone in 2 days.

Rory got us some rugelach (pictured) which satisfied my sweet tooth. Then I found out that Bread’s ships their delicous goodies nation-wide. Day. Made!