Spring Art on the High Line

With warmer weather and sunny skies on the way, Spring is a great time to get outside and enjoy the beauty of The High Line. Whether a stroll on your own, or a walk with one of our expert guides on the Chelsea Market, High Line, and Hudson Yards Food and History tour, be sure to check out the amazing art on display this season! 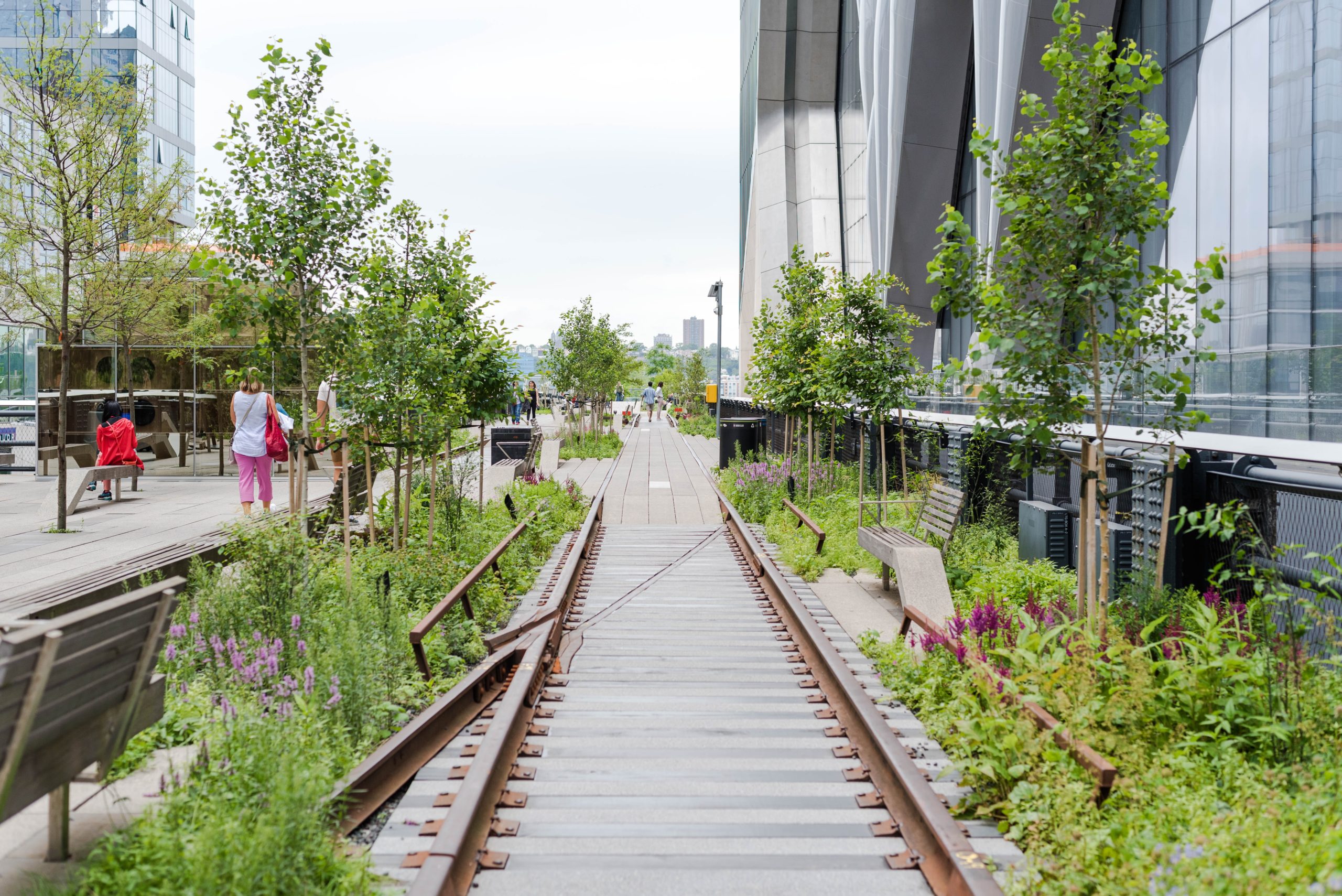 Destined for demolition, it’s hard to believe The High Line was once an unused industrial area. Originally built to create a safer route for the New York Central Railway, by the 80s the railway use became obsolete leading to decades long discussion on what to do with the structure. It was almost lost to demolition before Friends of the High Line was created to preserve nature taking back this area. After the decision to create the elevated park was made in 2006, the High Line finally opened it’s first section in 2009 and High Line Art was founded; an immersive experience that highlights national and international artists and their works, and continues every year to commission and produce artworks on and around the High Line.

High Line Art encourages artists and visitors to engage with the architecture, design, and history of the area in new and exciting ways.

Here’s what’s on view right now on the High Line courtesy of Thehighline.org:

“You know who I am is a large-scale cast bronze replica of the Statue of Liberty wearing various cartoonish masks. The masks are stylized portraits of individuals whose personal experiences of freedom are directly connected to the United States. The masks will change every two months, representing six different people over the course of the exhibition offering the sentiment that anyone could be represented within the symbol of the statue.” 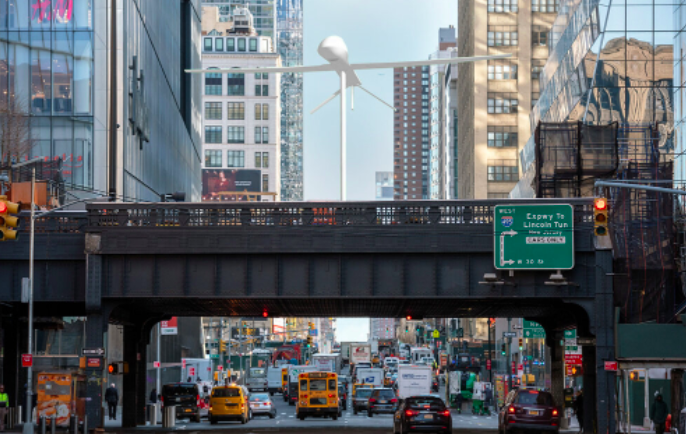 “With this work, Durant seeks to make visible the intentionally obscured drone warfare perpetuated by the US, and to remind the public that drones and surveillance are a tragic and pervasive presence in the daily lives of many living outside—and within—the United States. This large-scale fiberglass sculpture in the shape of an abstracted drone atop a 25-foot-tall steel pole continues High Line Art’s mission of presenting new, powerful, thought-provoking artworks that generate and amplify some of today’s most important conversations.”

Ibrahim Mahama’s 57 Forms of Liberty
On the High Line at 16th St.

“For the High Line, Mahama presents 57 Forms of Liberty, an inverted industrial tank from a defunct manufacturing facility in Wilmington, North Carolina. The work is inspired by a rusted smokestack the artist saw at the locomotive workshop in Sekondi, Ghana that now has a tree growing from its mouth. For Mahama, the workshop is an important reference to the British use of railways to divide and exploit resources until the country regained its independence in 1957. While the British railways, a former industrial tank from North Carolina, and the High Line have very different industrial histories, Mahama notes that it’s often when we zoom out, and remove ourselves from a specific space and time, that we can come to see our shared history all the better. The sculpture on the High Line also has a tree growing from its top, an important image for the artist that mirrors the torch of the Statue of Liberty to the south, and the non-human agents that continue to reinvent the conditions for living on this planet, even among the structures built and abandoned by humans.”

Jordan Casteel’s The Baayfalls
Adjacent to the High Line at 22nd St. 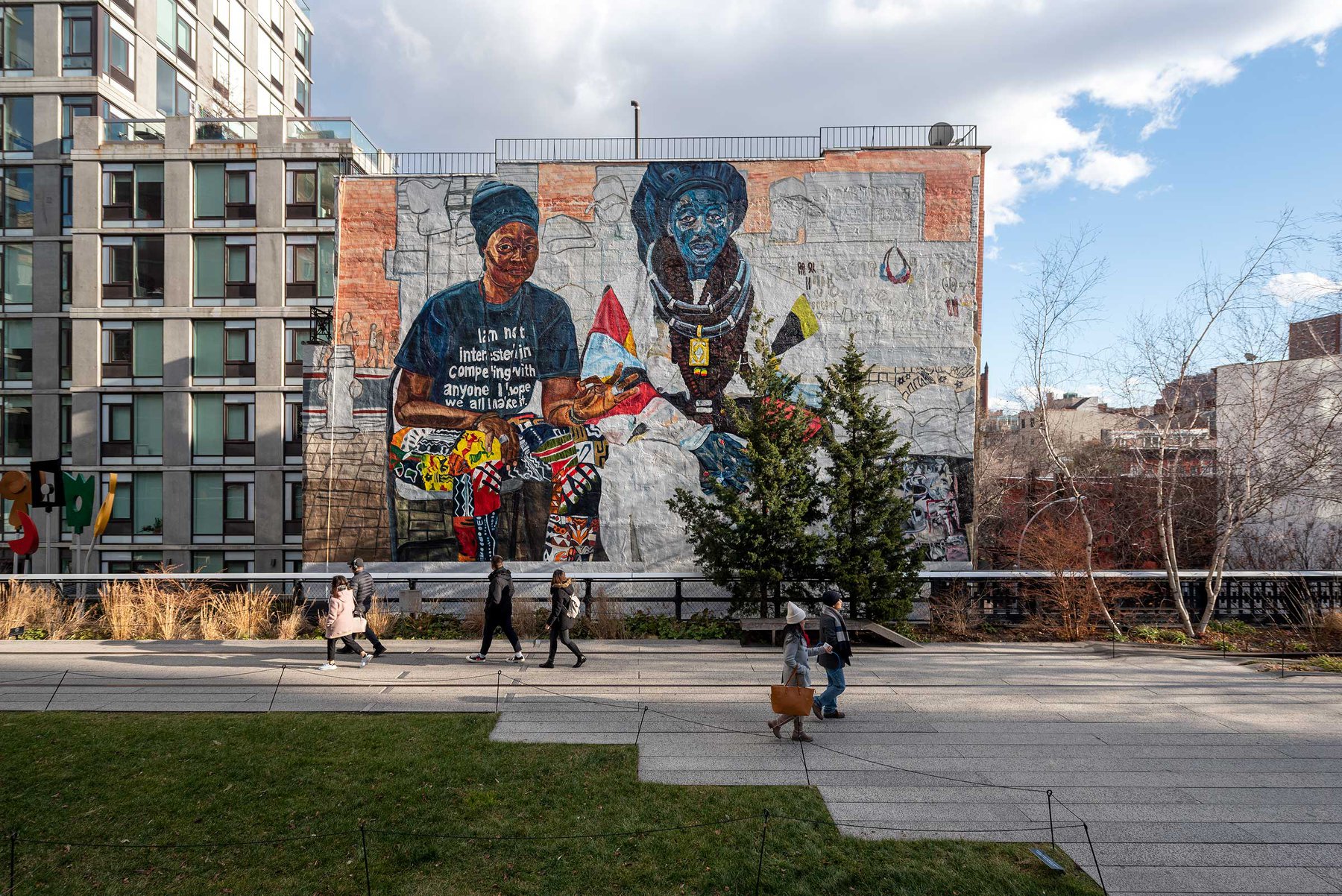 “The mural The Baayfalls recreates a painting on canvas of the same name originally made in 2017. The Baayfalls is a double portrait of Fallou—a woman Casteel befriended during her artist residency at The Studio Museum in Harlem—and Fallou’s brother, Baaye Demba Sow. The pair are pictured outside the museum at Fallou’s table, where she sold hats she designed.

Casteel’s work for the High Line extends the Harlem sidewalk to the park, connecting public spaces of different neighborhoods across the city. Through her portraiture, Casteel adds deeply nuanced expressions of human experience to the expanding collection of images we see every day.”