The Daily Telegraph: Brooklyn, New York City: What to eat, shop and see in hipster central 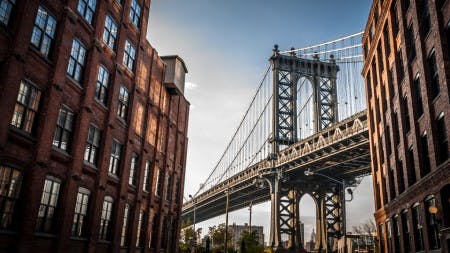 September 7, 2016 by Kristie Kellahan // In Brooklyn, they go hard. Take it from Jay-Z, you don’t want to miss out on BK. Five boroughs make up New York City, and Brooklyn is one of them. First-time visitors might think Manhattan is all there is, as it’s home to famous landmarks including Times Square, Central Park, Wall Street and the Empire State Building.

But skip Brooklyn and you’ll be missing out on the excitement of late-night live music, food markets, shops stuffed with vintage threads and some of the best pizza in the world.

Williamsburg, or Billyburg as it’s fondly known, is hipster central, a neighbourhood of cool bars, cutting-edge restaurants, good coffee and shops to write home about.

In downtown Brooklyn, you can cheer for the Nets at Barclays Centre or shop for bargains at brand-name outlet stores.

In Brooklyn Heights, eye off the beautiful brownstones and dream of making the move. Kid-friendly Park Slope is gentrified Brooklyn, full of elegant cafes and designer stores. Down by Brooklyn Bridge Park, enjoy the public art, some of the most photographed sites in the city. Or follow the Girls to gritty Greenpoint, where much of the series was set.

HOW DO I GET THERE FROM MIDTOWN MANHATTAN?

Getting to Brooklyn is relatively easy, depending on which neighbourhood you’re headed to. From mid-town Manhattan, an alphabet of subway trains go directly to Brooklyn: the A/C, B/D, N/Q, F, R, J/M/Z, as well as 2, 3, 4 and 5 trains depart regularly. There are buses as well. See mta.info.

Other options include ferries to Brooklyn Bridge Park/DUMBO and Williamsburg, or pedal power via Citi Bike, the nation’s largest bike share program.

WHERE ARE THE COOLEST HOTELS?

A decade ago, most visitors to Brooklyn had to stay in sublet apartments or tired, lacklustre hotels. Thanks to the borough’s rapid rise in the popularity stakes, stylish new hotel developments are rising as fast as real estate prices.

Wythe Hotel is housed in a 1901 industrial building on the Williamsburg waterfront, and its interior design cleverly incorporates industrial chic elements. The view of Manhattan is spectacular. The William Vale, which opened on August 8, also offers panoramic views of the Manhattan skyline and the longest lap pool in New York City.

The new 174-room Dazzler Brooklyn is inspired by its downtown BK location and a modern design aesthetic.

WHEN IS THE BEST TIME TO VISIT?

Brooklyn’s seasons are distinct and dramatic, so the best time to visit depends on what kind of weather you prefer, as well as any festivals or events you’re interested in attending. Summers (June-August) can be very hot and humid, while the colder months (December-March) can be Snowmageddon-level freezing.

For milder temps, the choice months are April, May, September and October. Springtime is beautiful, when the city is filled with cherry blossoms, and the autumn months are bathed in the brown, yellow and orange colours of autumn foliage.

WILL I SPOT ANY STARS?

Many TV shows and movies have been filmed in the borough, including the series Girls (Greenpoint was almost a fifth character), Boardwalk Empire, and the Anne Hathaway film The Intern.

A galaxy of famous names has moved to Brooklyn in recent years, including Hathaway, Maggie Gyllenhaal and Michelle Williams. Neighbourhoods where you are most likely to spot stars? Dumbo, Brooklyn Heights and Cobble Hill.

IS IT WORTH TAKING A TOUR?

There are some great tours of Brooklyn, including one that hunts down the best pizza in the city and a new tour for chocoholics (asliceofbrooklyn.com).

Other tours focus on the borough’s history, ethnic food culture, Christmas lights, public art or shopping. Like a Local Tours offers participants a choice from two of the borough’s most exciting art destinations – Park Slope/Gowanus and Bushwick. Learn about the inspirations the city artists draw from and use the opportunity to pick up some affordable art.

WHAT SHOULD I BUY IN BROOKLYN?

Artisanal everything. More than any other place in New York City, Brooklyn is known as the anti-mass-production borough. It’s the place to try small-batch chocolate, beer, pickles and bread.

Fossick for vintage and design treasures at the Brooklyn Flea and along Bedford Avenue, where the stores and street vendors sell everything from vinyl records to 1970s feather boas.

Show your BK pride with borough-branded goods from Brooklyn Industries . Or get souvenirs at Brooklyn Museum shop.

WHERE SHOULD I GO FOR NIGHTLIFE?

Knock back a few coldies with bearded hipsters at the Brooklyn Brewery.

The brewery is open until 8pm on Saturday and 6pm on Sunday.

Or try the boutique small-batch vinos at Brooklyn Winery, before progressing to The Shanty at New York Distilling Company.

Enjoy a rooftop cocktail at the Wythe Hotel and toast the Manhattan skyline view. Later on, join locals at Brooklyn Bowl, where live music and bourbon-doused milk shakes make this the bowling alley of our dreams.

End your night in the wee hours at Union Pool (a live music venue and bar in a former pool supply store), with strong cocktails and some nosh from El Diablo taco truck.

ARE THERE ANY GREEN SPACES TO RELAX IN?

For sure, it’s not all converted warehouses and industrial chic. Brooklyn’s Prospect Park is the borough’s answer to Manhattan’s Central Park, with vast open spaces, a concert stage, a zoo, sports fields and Brooklyn’s only lake.

Brooklyn Bridge Park is closer to Manhattan, on the waterfront of the East River, with great views of the city skyline.

Public art sculptures can be enjoyed here, as well as tracks for cycling and rollerblading. Get there by ferry from the Financial District or 34th Street, or walk the Brooklyn Bridge, camera at the ready.