NYC Architecture Tour: The Birth and Death of American Modernism 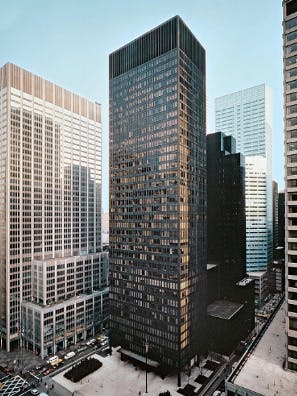 Along a stretch of midtown Manhattan streets less than a mile in length stand some of the most important buildings in the country. In this compact area, the world’s most influential architects gave birth to American Modernism, built its undisputed triumphs, and sang its swan songs. The story hinges on four Modern landmarks: the United Nations Headquarters (1952), Lever House (1952), the Seagram Building (1958), and to a lesser degree, the Pan Am Building (1963). It seeks to explain why our buildings look the way they do, and why they could only have appeared this way right here in New York City.

American modernism is an artistic and cultural movement in the United States beginning at the turn of the 20th century, with a core period between World War I and World War II.

Very broadly speaking, Modernism was an acceptance and then regional celebration of the Industrial Age wherever and whenever it took hold. By some measures, it first appeared in Western Europe around the turn of the twentieth century and continued to spread around the globe until the late-1960s. Through the first quarter of the century, America was still reeling from the insecurities of a devastating Civil War. Our architects remained stuck on the neoclassical trappings of the preeminent architecture school in Paris, the Ecole des Beaux Arts, and the cultural legitimacy these Greek and Roman models might bestow onto a politically fragile nation.

A 1932 show at the Museum of Modern Art attempted to codify what the more avant-garde European architects had been doing and introduce the new style to the American public. But it took the crash of the stock market to show that pouring relatively exorbitant resources of the Art Deco style into increasingly tall buildings carried almost unethical implications. Designers began streamlining around 1933, a quasi-scientific pruning of excessive ornament that they believed would symbolically rescue us from the depths of the Depression.

By the end of that decade, American architecture had mostly caught up with its European counterparts, but little could be built during the Depression or World War II. The enormous outpouring of wartime industrial production had to be diverted to other goals when the war was over for the economy to not come to a screeching halt. Construction of the new, bright and shiny, technologically sophisticated, Capitalist American city was probably the most significant result, often with the help of members of that original avant-garde. This is where Modernist Architecture truly blossomed at mid-century, and arguably in no city quite as spectacularly as in New York.

Your guide, Ryan Witte, first fell in love with architecture at the age of around twelve when he discovered the work of the Swiss master, Le Corbusier, and the Bauhaus, the almost cultish breeding ground for Modernism in Germany. One of his favorite pastimes is making trips to visit architectural masterpieces around the tri-state area and adoringly photograph them. Over the last decade or so, he has focused much more of his research on the intersections of architecture and design with matters of social justice, examining how the built environment can be oppressive or inclusive, imperialistic or diplomatic. He hopes to endow his guests with the knowledge to effectively interpret New York’s buildings for themselves, and instill in others his passion and appreciation for the city.

Read more about our wonderful tour guide Ryan Witte who leads these tours.