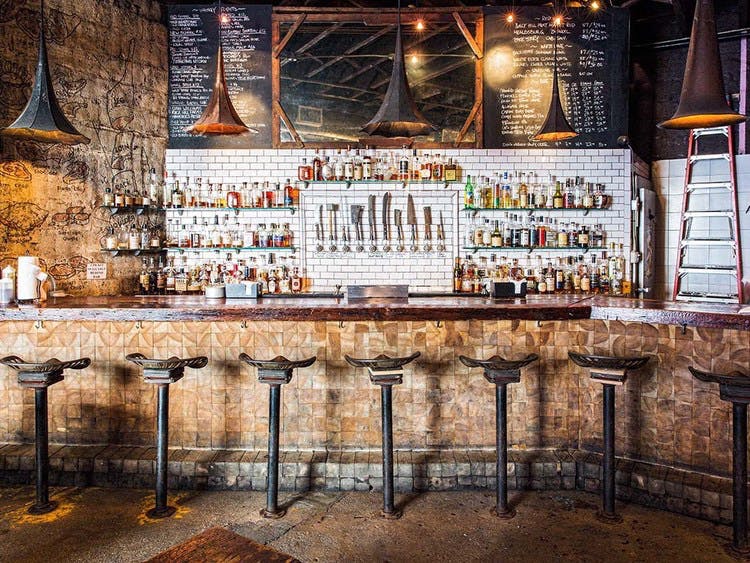 “Meet me by the Astor Place cube!” That’s how this article came to be. Where did the cube come from, what does it symbolize? Read on to learn those answers and more about some of NYC’s most prominent sculptures.

As a New Yorker, I don’t think we even notice these incredible sculptures, so we did a little digging and wanted to share their stories with you… 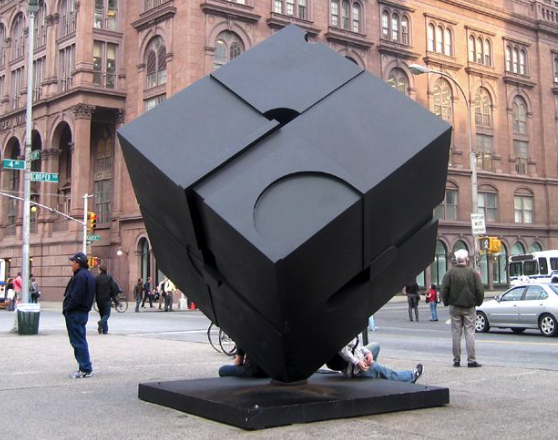 The Alamo, aka The Cube was intended as a temporary art installation. It has been in Astor Place for 50 years! It takes the form of a black cube, 8 feet (2.4 m) long on each side, mounted on a corner. The cube is made of steel and weighs about 1,800 pounds (820 kg). The faces of the cube are not flat but have various indentations, protrusions, and ledges. The sculpture’s name, Alamo, is designated on a small plaque on of the base and was selected by the artist’s wife because its scale and mass reminded her of The Alamo Mission (in San Antonio).

Artist Tony Rosenthal has installed several other cubes in Michigan, Miami, Ohio and elsewhere. But this is the first and most iconic cube. It is now a symbol of the neighborhood and a meeting place; somewhere to hang out. 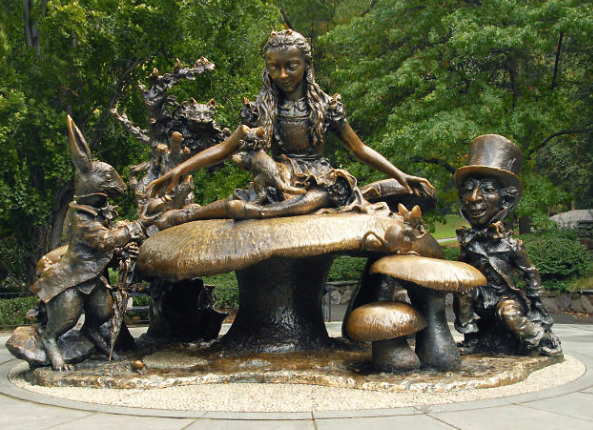 The sculpture was constructed in 1959 by José de Creeft under the commission of philanthropist George Delacorte so that children could visit and experience the wonder of Lewis Carroll’s classic story. Atypical of most sculptures, children are invited to climb, touch and crawl all over Alice and her friends. In fact, through the decades thousands of hands and feet have literally polished parts of the statue’s surface smooth.

The design for the bronze sculpture was patterned off the original illustrations of John Tenniel that were used in the first published edition of the book. The obvious centerpiece of the work, Alice, who depicts the face of Creeft’s daughter, Donna, is pictured sitting on a giant mushroom reaching toward a pocket watch held by the White Rabbit. Peering over her shoulder is the Cheshire Cat, surrounded by the Dormouse, Alice’s cat Dinah, and the Mad Hatter — a caricature of George Delacorte. 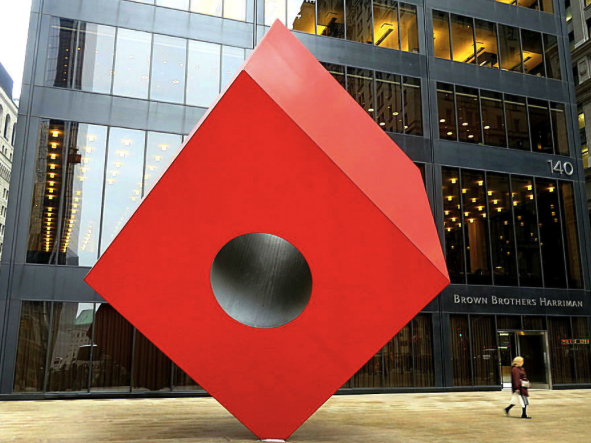 Located in front of 140 Broadway, between Liberty and Cedar Streets.

The bright red painted steel of Isamu Noguchi’s Red Cube stands out in strong contrast to the blacks, browns, and whites of the buildings and sidewalks around the sculpture. Despite its title, the sculpture is not actually a cube as it’s distorted. Red Cube also stands out from the surrounding architecture because all of its lines are diagonal, and the sculpture is balanced on one corner, while the buildings are solidly on the ground. Noguchi has a museum in Queens that is worth a visit! The Noguchi Museum was designed and created by the Japanese-American sculptor Isamu Noguchi. www.noguchi.org 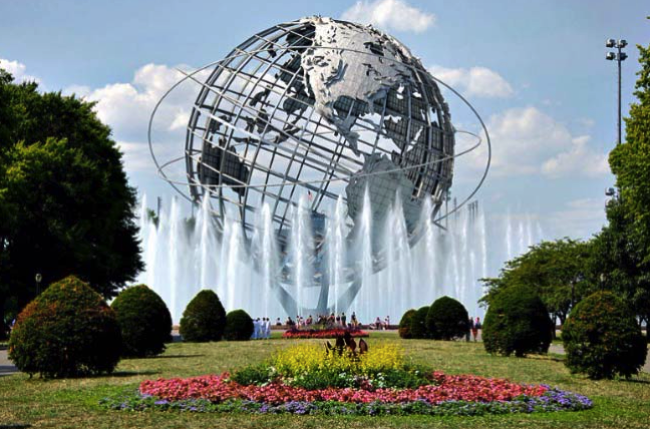 In the heart of Queens is a massive sculpture of the Unisphere, located in Flushing Meadows-Corona Park. This sculpture is a spherical steel representation of the Earth, which was commissioned to celebrate the beginning of the Space Age for the 1964-1965 World’s Fair in New York. The Unisphere officially represents the theme of global interdependence and was dedicated to “Man’s Achievements on a Shrinking Globe in an Expanding Universe.” However, it can also represent NYC as a multicultural microcosm of the nations of the world. 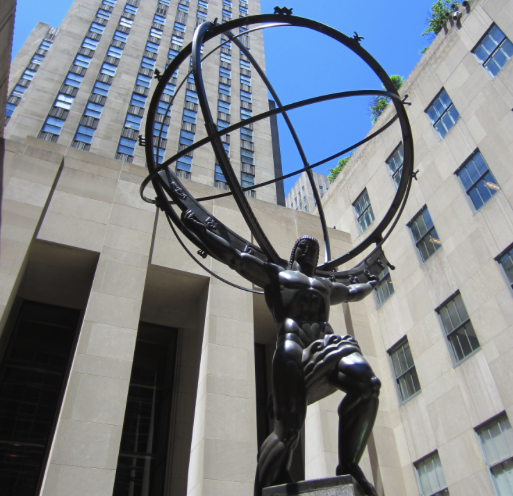 Atlas is a bronze statue in front of Rockefeller Center in midtown Manhattan, New York City, across Fifth Avenue from St. Patrick’s Cathedral. The sculpture depicts the Ancient Greek Titan Atlas holding the heavens. It was created by sculptor Lee Lawrie with the help of Rene Paul Chambellan, and it was installed in 1937.

The North-South axis of the armillary sphere on his shoulders points towards the North Star as seen from New York City.

When Atlas was unveiled in 1937, some people protested, claiming that it looked like Italian dictator Benito Mussolini. Later, painter James Montgomery Flagg said that Atlas “looks too much as Mussolini thinks he looks”.

The piece has since been appropriated as a symbol of the Objectivist movement and has been associated with Ayn Rand’s novel Atlas Shrugged (1957).

It has been featured in almost every episode of the television series 30 Rock, appearing in numerous establishing shots depicting the 30 Rockefeller Plaza building, where the series is set.