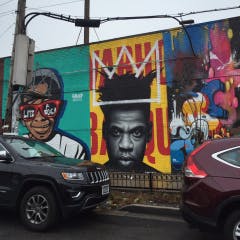 The Brooklyn Heights Promenade will take your breath away. If you’ve watched Annie Hall and Moonstruck, you’ve seen this iconic spot. According to the NY Harbor Parks website, it is one-third of a mile long, it offers a vista of the Statue of Liberty, the Manhattan skyline and the majestic Brooklyn Bridge. Lined with flower beds, trees, benches and playgrounds, the promenade is a favorite destination for tourists, joggers, strollers, families and lovers.

It’s a great place to visit whether you’re local or visiting from out of town. If you’re staying in Manhattan, we recommend a walk across the Brooklyn Bridge and then a few hours to enjoy the promenade. Plan your visit to finish up around sunset for incredible views (and photos!). The walk across the bridge takes about an hour, so plan accordingly.

Walk a few blocks along the water towards DUMBO (which stands for Down Under the Manhattan Bridge) to Jane’s Carousel. Jane’s Carousel (formerly Idora Park Merry-Go-Round) is a carved, wooden, 48-horse carousel that was built in 1922 for the Idora Park amusement park in Youngstown, Ohio. When Idora Park closed to the public in 1984, the carousel was bought at auction by Jane and David Walentas (real estate developers largely created with creating the DUMBO & Brooklyn Heights we know today) and moved to Brooklyn, New York for restoration. It was opened to the public at its new location in Brooklyn Bridge Park on the East River in Brooklyn on September 16, 2011. Rides are only $2! 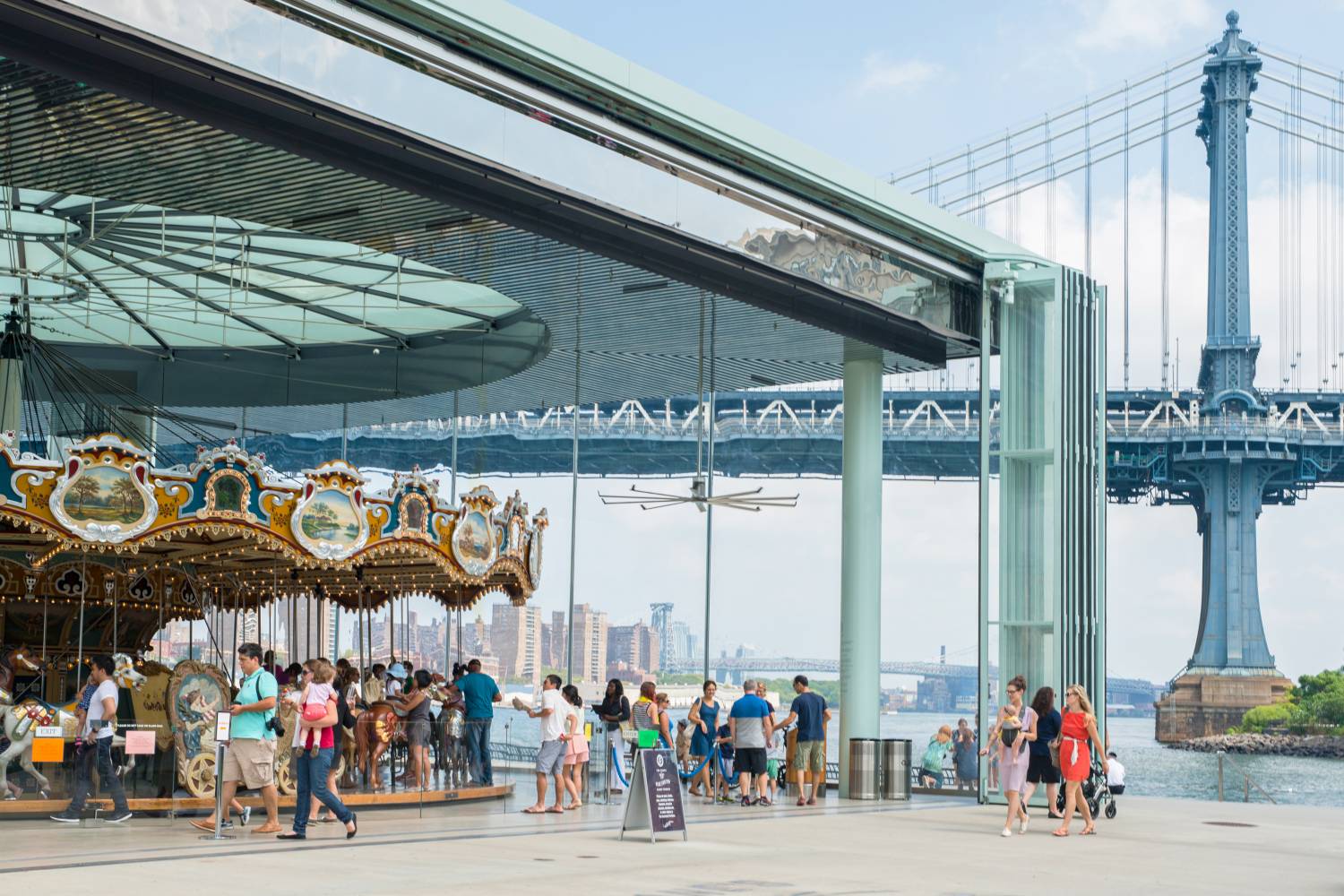 For savory, our faves are Luke’s Lobster and Juliana’s (the sister pizza joint to Grimaldi’s). Luke’s does lobster rolls in their purest form: a lightly toasted, decidedly not-fancy hot dog bun stuffed with a quarter pound of knuckle and claw meat. All of the lobsters served here are caught off the coast of Maine and then steamed, packed and shipped to the City.

For sweet, master chocolatier Jacques Torres established his first shop and chocolate factory in DUMBO. The factory has moved to a bigger space. We recommend, well everything! There are ice cream sammies made with their famous cookies. Don’t forget ice cream! Stop at the Brooklyn Ice Cream Factory for locally made Philadelphia-style (in other words, egg-free) scoops. One Girl Cookies has a wide assortment of mini cookies and dainty whoopie pies. Especially do not miss Almondine, where owner and pastry chef Hervé Poussot (formerly of Payard and Le Bernardin) does all baking on premises.

Be sure to check out Anish Kapoor’s Decsension. This whirlpool art installation is 26-feet in diameter, and the spiraling funnel is treated with an all-natural black dye, to create a black-hole effect. Location below:

If you’re old school book fiends like we are, there are two amazing independent bookstores nearby. PowerHouse Arena and P.S. Bookshop.

Other exciting events this spring and summer include:

Every Saturday afternoon, check out a one-hour, family friendly concert on a barge! Hit the link above for lots more events.

Artist Jesse Chun’s Twenty Five-Hours exhibition is next up in a rotating program of original works by local artists hosted at 99 Plymouth. Working from a research-based process, Chun reinterprets a collection of scientific data, charts and predictions, historical facts, books and articles about the Brooklyn Waterfront and the East River tides.

A little bit of history about the Brooklyn Promenade (from the NY Parks Website):

Looking out on the East River, the promenade is bordered by grand townhouses and mansions, and is part of Brooklyn’s first Historic Preservation District. The adjacent neighborhood of charming brownstone homes and quiet streets is well worth investigating. Brooklyn Heights encapsulates the history of New York and America. The Dutch first appeared in 1645, forming the settlement of “Breuckelen” near the site of today’s Borough Hall. The bluffs of Brooklyn Heights were already a popular location in the 18th century when many of Manhattan’s early merchants built mansions there overlooking the city on the island below. It was from Brooklyn Heights that George Washington watched the Battle of Brooklyn unfold into a terrible defeat for the young Colonial Army. Under the cover of darkness on August 29th, Washington’s army crossed the East River from Fulton Ferry, below where the Brooklyn Bridge rises today, leaving Brooklyn to the British.

During the 1800’s, New York and Brooklyn boomed and many of New York’s wealthiest investors settled in Brooklyn Heights. In 1807, Robert Fulton captained his steamboat, The Clermont, from Brooklyn on its maiden voyage up the Hudson River. In 1814, Fulton gained a franchise to operate ferry service via steamboat from Brooklyn to Manhattan. As the population exploded, Brooklyn became a city in 1833, and throughout much of the 1800s was the third most populous city in America.

In the mid-1940s Robert Moses wanted to construct a new expressway right through the heart of Brooklyn Heights. He was stopped by the outcry of the Brooklyn Heights Association, and a solution emerged to build a two-tiered highway above the waterfront. The Promenade was constructed in part to insulate the neighborhood from the noise of the Brooklyn Queens Expressway. It opened to the public in October 1950 and has been a magnet for local residents and visitors alike for over half a century.