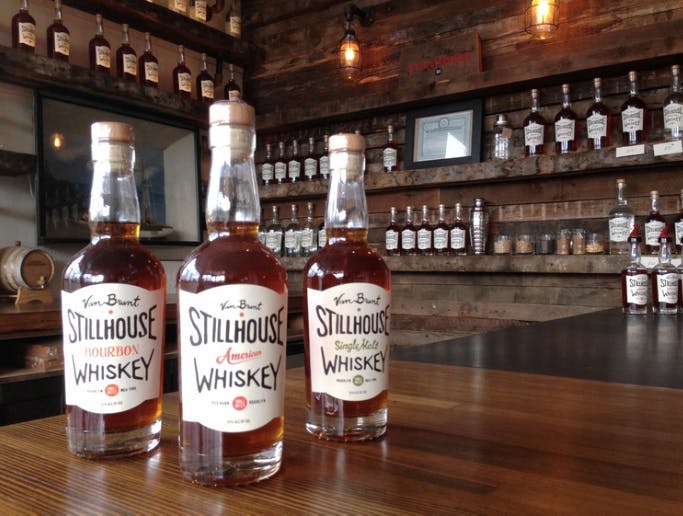 One of the best things about Brooklyn is the craft maker movement. Several of our tours are built around experiencing this phenomenon which not only is an opportunity to learn about these dynamic businesses, but a chance to meet and interact with the people who built them. One of those places is Van Brunt Stillhouse which we visit on our Red Hook Tour. We had a chance to chat with Nic Cowles who is the Tasting Room Manager of Van Brunt Stillhouse. Read on for some exciting insider info on this fantastic craft distillery.

What’s the history of Van Brunt Stillhouse? How did it come to be?

Van Brunt Stillhouse takes a time honored traditional approach to distilling. Sourcing wheat, rye and corn directly from upstate New York farmers. Making every spirit from scratch in the waterfront neighborhood of Red Hook in Brooklyn. Our family of whiskeys give a nod to classic styles while remaining innovative, creating bold and flavorful spirits.

Van Brunt Stillhouse brand is built on the principles of integrity, creativity and pure hard work. In the pioneering spirit of Cornelius VanBrunt, who was a farmer in the Dutch colony of Breukelen, husband and wife team Daric Schlesselman and Sarah Ludington founded Van Brunt Stillhouse, driven by a love of Craft. The Stillhouse has been producing farmhouse style whiskeys in the heart of modern day Brooklyn since 2012. As master distiller, Daric brings a creativity to his recipes while working within the traditions of distilling fine spirits. He has developed a line of spirits that establishes his unique voice within traditional spirit categories, as well as our American Whiskey, which is unlike any other on the market. These whiskeys are celebrations of small batch spirits that showcase the flavorful essence of the grains.

What sets you apart from other small batch distilleries?

Van Brunt Stillhouse is a New York State Farm Distillery. That means we source the majority of our ingredients from the state. All of our corn, wheat and rye comes from just one farm, Oeshsner Farms, located in the Finger Lakes. All of our spirits are 100% made in house from the milling of the grains to the barrel aging.

Is there anything new on the horizon?

We will be celebrating NY Rye Week in October with events around the city culminating in a party at the distillery on October 20th. The party will feature local DJs, rye whiskey cocktails and the release of our 3rd bottling of Empire Rye, a new class of whiskey that can only be made in NY State.

How can people try your spirits?

Our Bar and Tasting Room is open 4-9pm Thursday and Friday, 2-9pm Saturday and 2-8pm on Sunday. We serve tasting flights, cocktails made with our spirits and local beer, wine and cider. Tours are offered on Saturday and Sundays.