Focus on Immigrant NY on our Lower East Side Food Tour 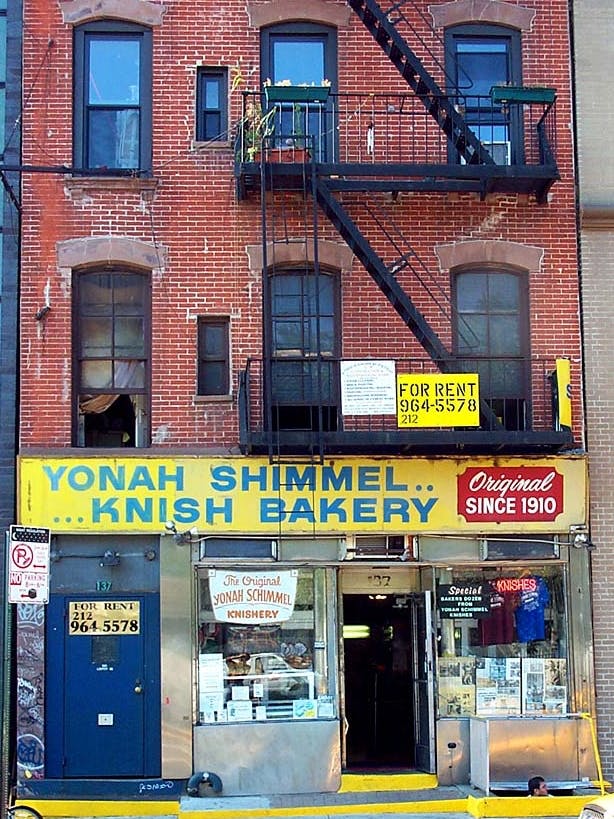 The story of immigration and migration in the United States is one that can be told through the history of New York City. Our Lower East Side Food Tour tells all and fills your tummy all while meeting the people that make NYC what it is!

Most immigrants who came to New York City in the late 19th and early 20th centuries came to the Lower East Side, moving into crowded tenements there. By the 1840s, large numbers of German immigrants settled in the area, and much of the area became known as “Little Germany.” The Germans were followed by large numbers of Italians and Eastern European Jews, as well as Greeks, Hungarians, Poles, Romanians, Russians, Slovaks and Ukrainians. Each group settled in relatively homogeneous enclaves. By 1920, the Jewish neighborhood was one of the largest of these ethnic groupings, with 400,000 people, pushcart vendors prominent on Orchard and Grand Streets, and numerous Yiddish theaters along Second Avenue between Houston and 14th Streets. 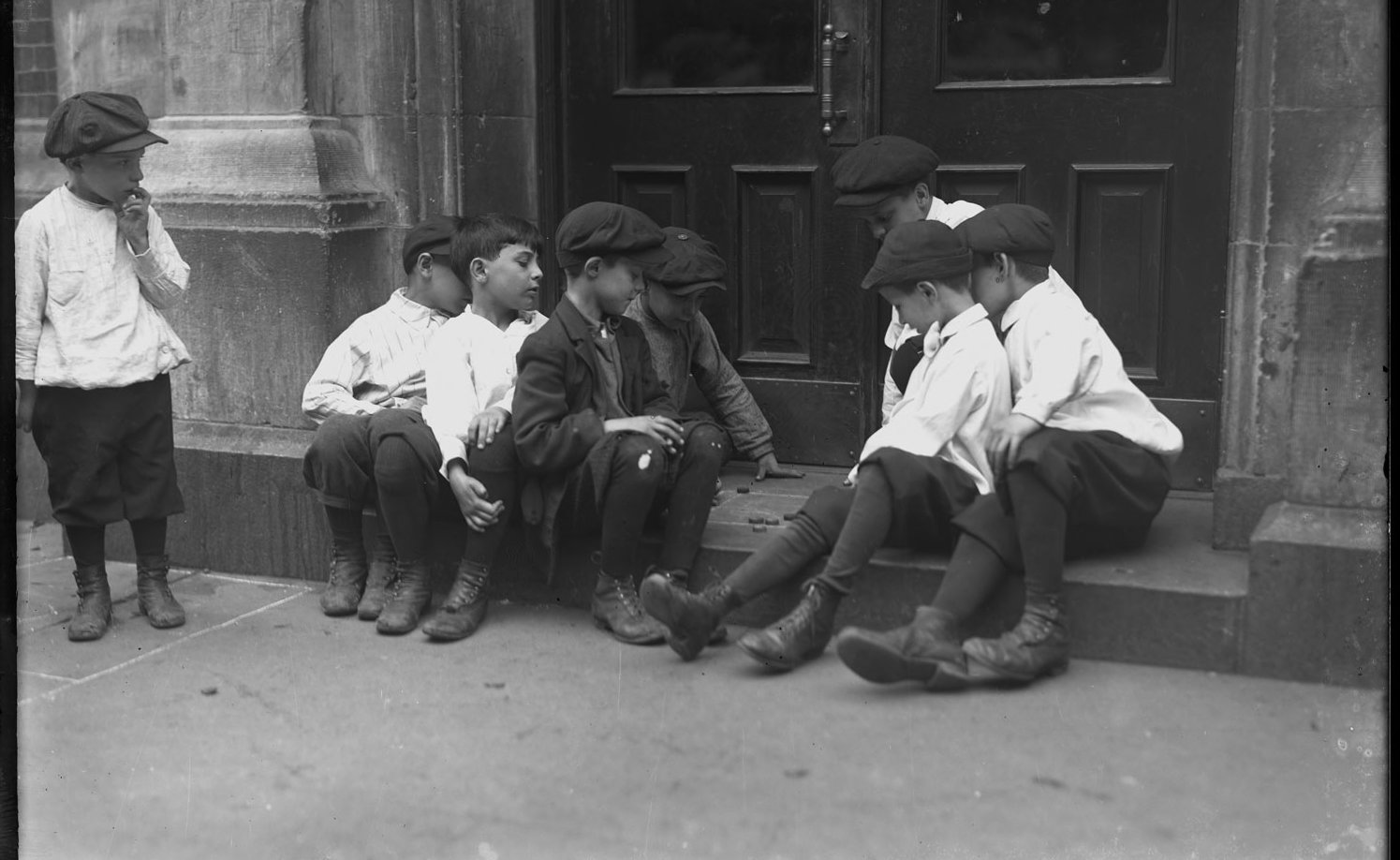 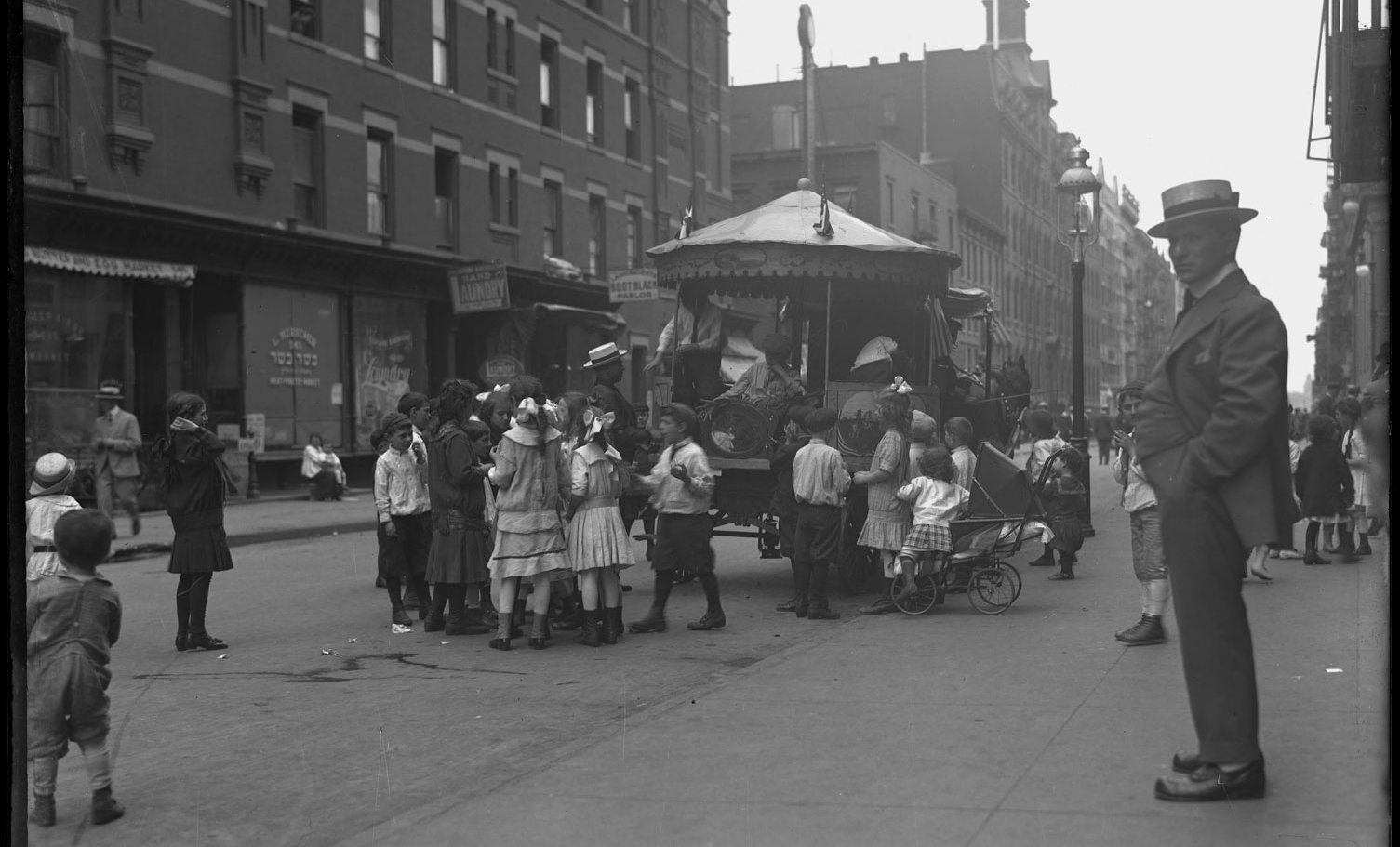 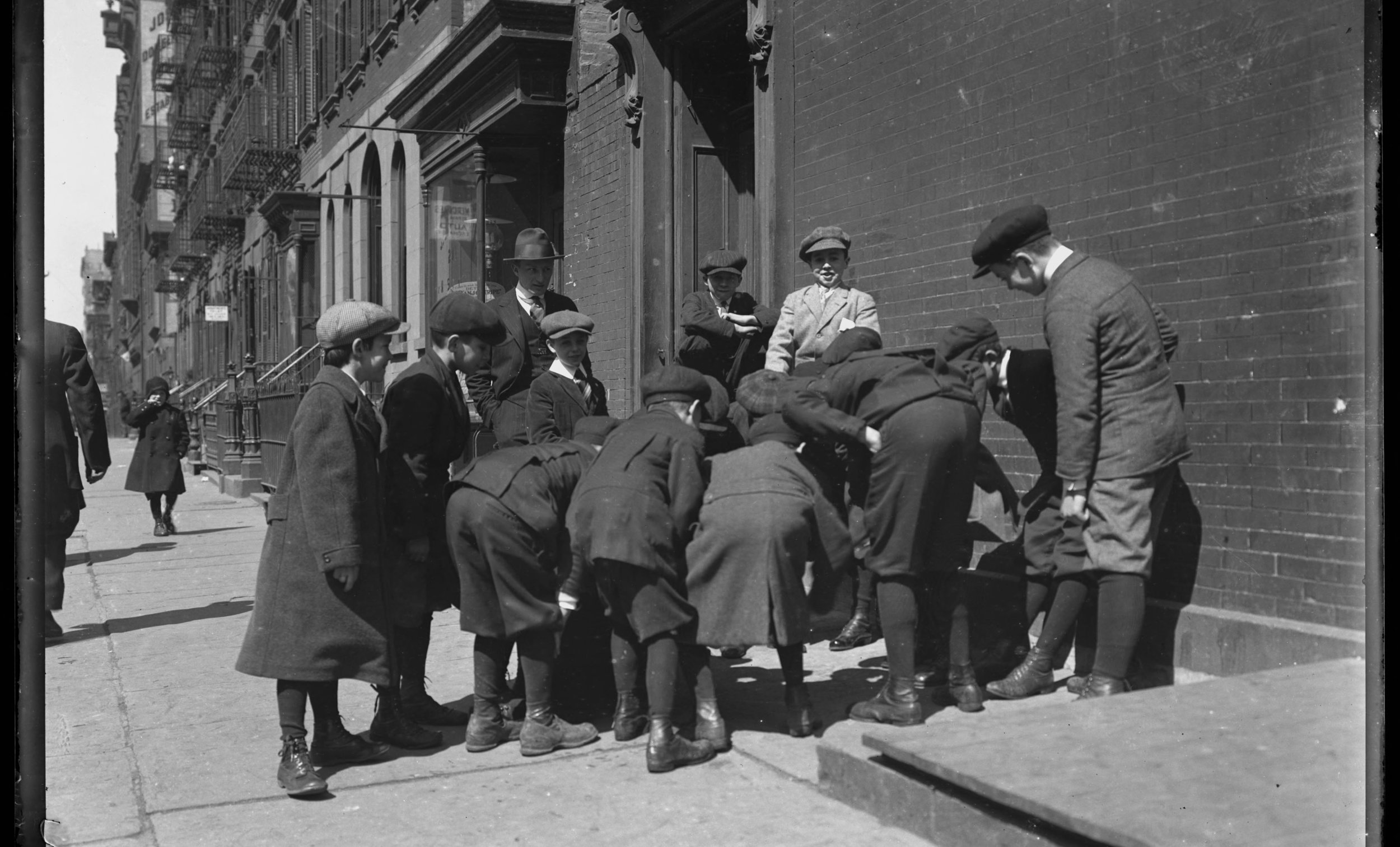 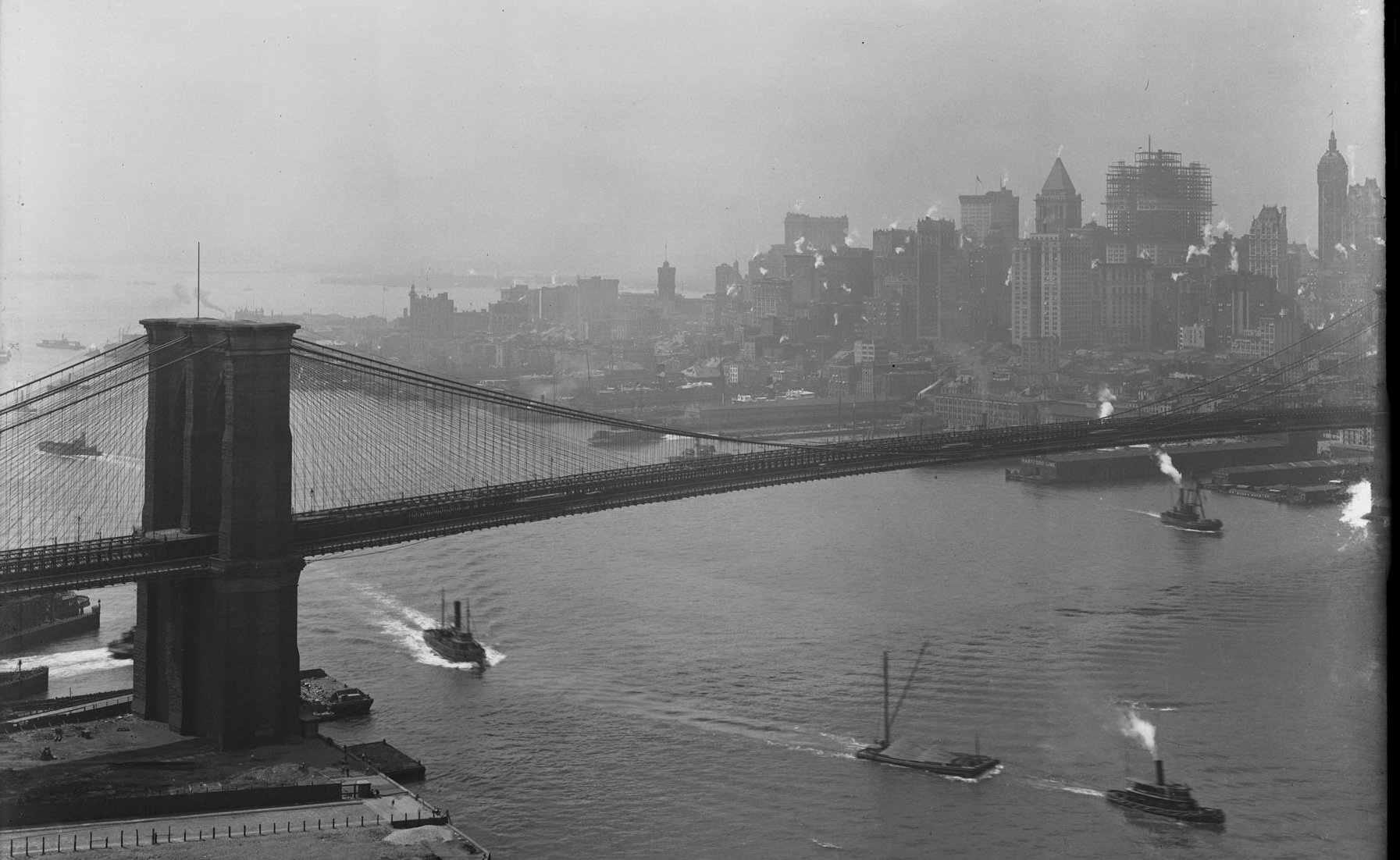 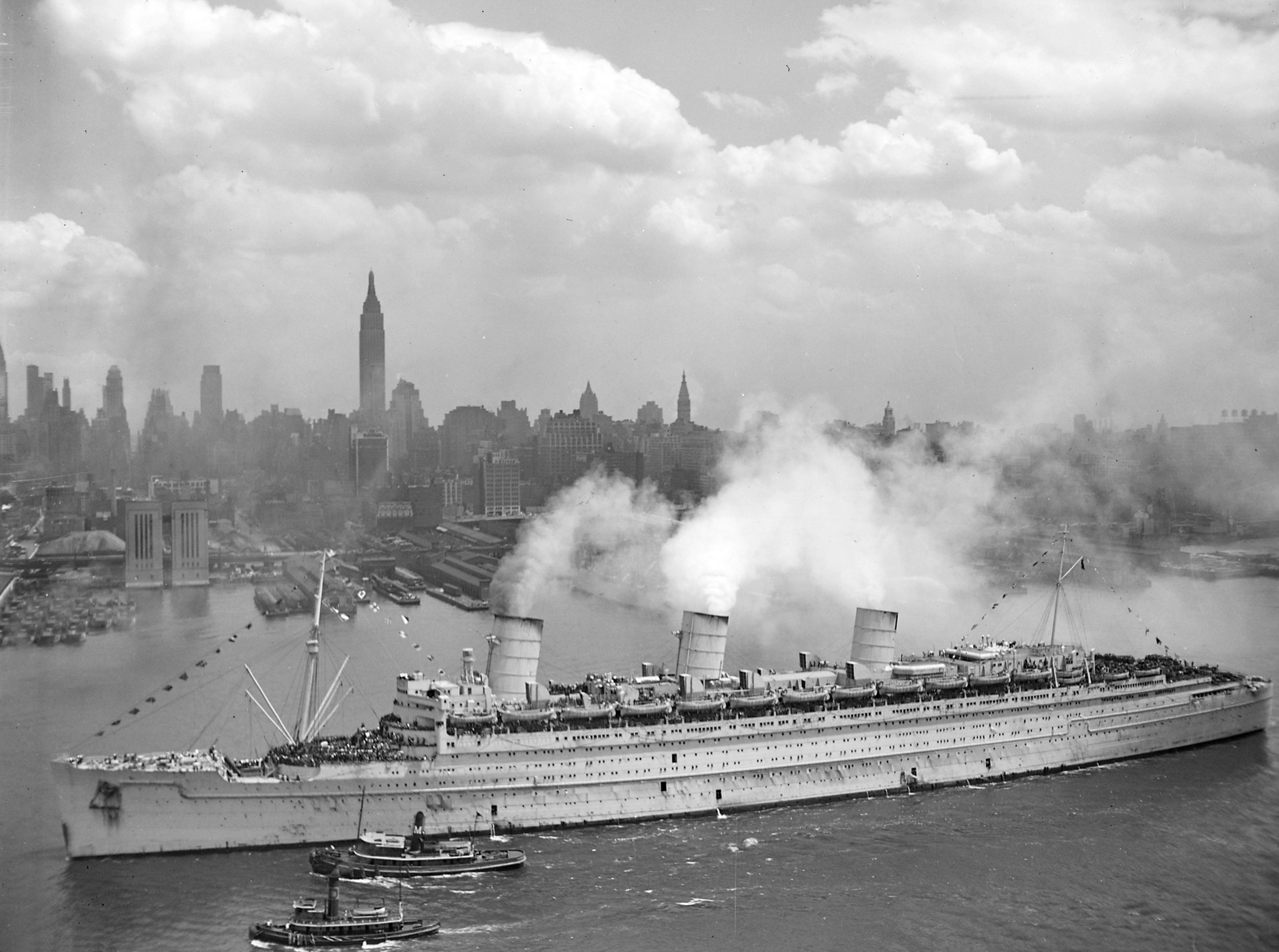 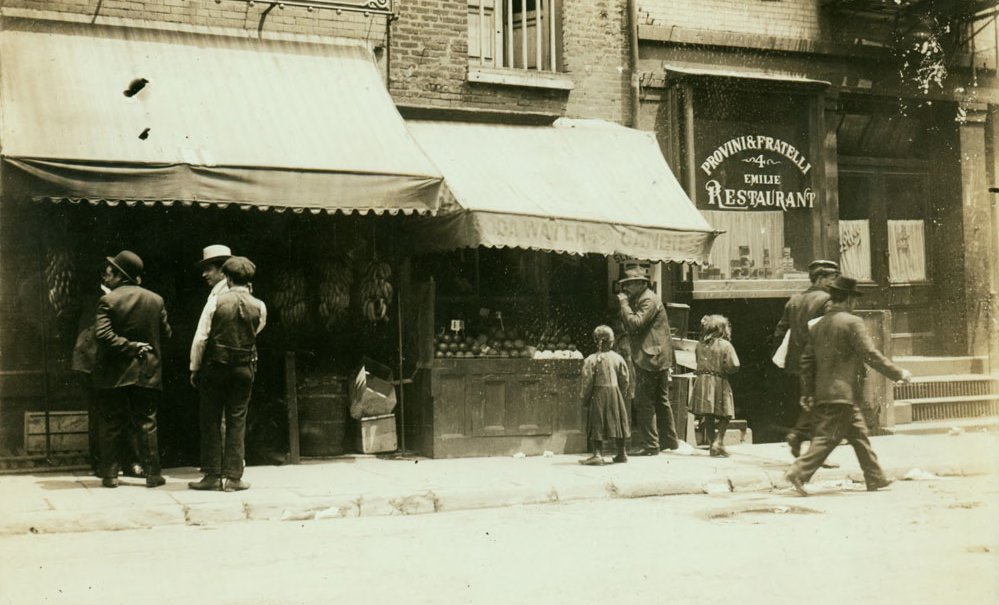 By the turn of the twentieth century, the neighborhood had become closely associated with radical politics, such as anarchism, socialism and communism, and was also known as a place where many popular performers had grown up, such as the Marx Brothers, Eddie Cantor and George and Ira Gershwin. Later, more radical artists such as the Beat poets and writers were drawn to the neighborhood – especially the parts which later became the East Village – by the inexpensive housing and cheap food.

The German population decreased in the early twentieth century as a result of anti-German sentiment prompted by World War I. After World War II, the Lower East Side became New York City’s first racially integrated neighborhood with the influx of African Americans and Puerto Ricans. Areas where Spanish speaking was predominant began to be called Loisaida.

By the 1960s, the influence of the Jewish and eastern European groups declined as many of these residents had left the area, while other ethnic groups had coalesced into separate neighborhood, such as Little Italy. The Lower East Side then experienced a period of “persistent poverty, crime, drugs, and abandoned housing.”

Read on to discover the places we go, the foods we eat, and where they came from:

Essex Street Market began in 1940 as part an effort by Mayor Fiorello H. LaGuardia to find a new place for street merchants to do business. At the time, pushcarts and vendors crowded the city streets, making it difficult for police and fire vehicles to easily pass. To ease congestion, Mayor LaGuardia created the Essex Street Market and several other indoor retail markets throughout the city.

In the early years, Essex Street Market’s identity was shaped by the Lower East Side’s Jewish and Italian immigrants, who served as both the merchants and the customers. Local residents got personalized service as they gathered to browse a diverse collection of goods and sundries including flowers, meats, clothing and fresh produce. Beyond its intended function as a shopping destination, the Market also developed into a social environment where residents came to connect and share ideas.

Here we eat some delicious Sicilian street food called arancini which is a fried rice ball stuffed with cheese, meat, or other yummy ingredients. 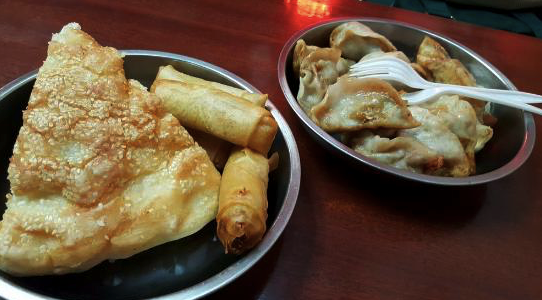 History of the dumpling (from history.com): From Italian ravioli, to Polish piroshky, to Chinese pot stickers, the humble dumpling is beloved by eaters around the world. Truly a universal food, you’d be hard pressed to find a cultural cuisine that doesn’t include dumplings in some form, be it stuffed or boiled. Ghanaians make fufu from pounded cassava flour, while Nepali diners enjoy momo and Brazilians eat empanadas. Dumplings are also an ancient food. Recipes for them appear in Roman texts, and it’s certain that Chinese dumplings are even older. This week Hungry History tackles the extensive, international and delicious history of the dumpling.

Just like bread, dumplings probably arose independently in several cuisines. And in all likelihood they were invented as a way to stretch a small amount of meat to feed more people. A pound of pork or beef might not be enough for a family of four, but mix it with some cabbage and onions and wrap it in dough and it’s a perfectly sufficient meal. 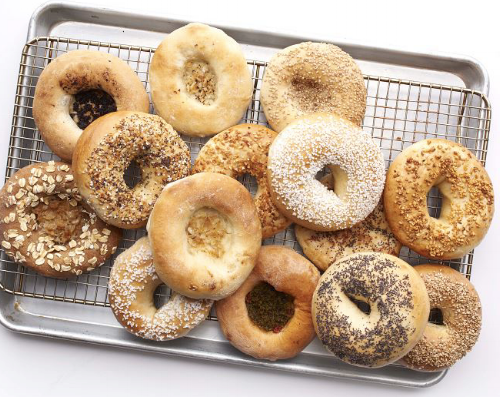 Kossar’s Bialys (Kossar’s Bialystoker Kuchen Bakery) located at 367 Grand Street (and Essex Street), on the Lower East Side in Manhattan, New York City, is the oldest bialy bakery in the United States. The bialy gets its name from the “Bialystoker Kuchen” of Białystok, Poland (at the time under Russian occupation). Russian Jewish bakers who arrived in New York City in the late 19th century and early 20th century made an industry out of their recipe for the mainstay bread rolls baked in every household.

History of the pickle (From PBS.org) – Kosher dills have a unique history of their own. In The Book of Jewish Food, Claudia Roden explains that pickled vegetables were a dietary staple for Jews living in the Ukraine, Poland, Lithuania and Russia. The sharp flavor of pickles proved a welcome addition to the bland bread-and-potato diet of these cold weather countries. For several generations, it was an autumn custom for Ashkenazim to fill barrels with cucumbers, beets and shredded cabbage. The mixture was left to ferment in a warm place for several weeks, then relocated to cool, dark cellars. The pickles would last through the long cold winter until spring, when new crops of fresh produce were available.

When a heavy influx of eastern European Jews arrived in New York City during the late 1800s and early 1900s, immigrants introduced kosher dill pickles to America. Cucumbers were washed, then piled in large wooden barrels along with dill, garlic, spices, kosher salt and clean water. They were left to ferment for a few weeks to several months; shorter fermenting time produced brighter green “half sours,” while longer fermentation resulted in “full sours.” Pickles were sold on pushcarts in the immigrant tenement district of New York City. Over time, Jewish-owned shops selling pickles straight out of the barrel began appearing in droves. Eventually, pickling became a profitable business within the Jewish community. Today, a plate of pickles is usually served complimentary with a meal at the best Jewish delis. 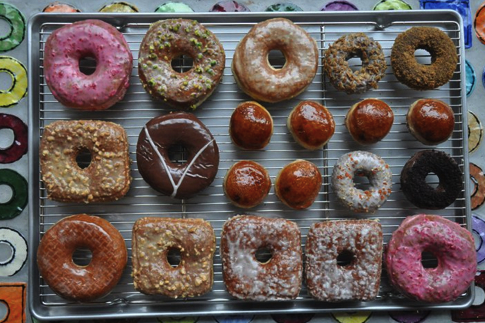 While food resembling doughnuts has been found at many ancient sites, the earliest origins to the modern doughnuts are generally traced back to the olykoek (“oil(y) cake”) Dutch settlers brought with them to early New York (or New Amsterdam). These doughnuts closely resembled later ones but did not yet have their current ring-sized shape. One of the earliest mentions of “doughnut” was in Washington Irving’s 1809 book A History of New York, from the Beginning of the World to the End of the Dutch Dynasty. 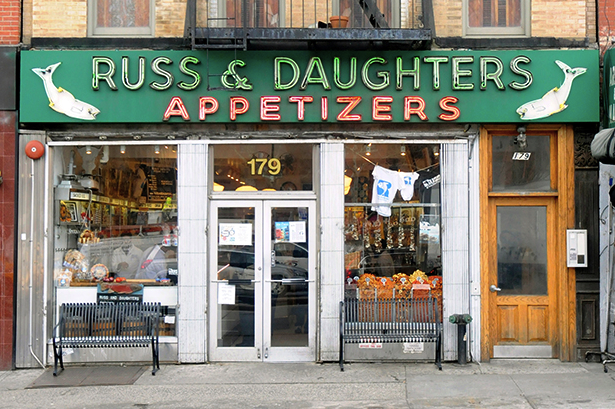 History (from Wikipedia) – Russ & Daughters opened in 1914. It is located at 179 East Houston Street, on the Lower East Side of Manhattan, New York City. A family-operated store, it has been at the same location since 1914. Joel Russ, a Polish immigrant who arrived in Manhattan around 1905, started the business to cater to the Jewish immigrants settling in the Lower East Side of New York. He began by carrying Polish Mushrooms on his shoulders, and saved enough money to purchase a pushcart. He then expanded his operation and sold pickled herring as well as Polish Mushrooms. Then in 1914, Joel Russ opened J Russ International Appetizers, a storefront around the corner from the current location.

In 1920, Joel Russ opened his store at the current location of 179 East Houston Street. In 1933, he renamed the business “Russ and Daughters” after making his three daughters, Hattie, Anne, and Ida, partners in the store. Historically, businesses typically took on the name “and sons”, but since Russ and his wife Bella only had daughters, his business became Russ & Daughters. However, Joel Russ was not a feminist ahead of his time. For him, getting his daughters into the business was not a matter of women’s rights, but a matter of parnosa, or surviving to make a business. As he put it, he was concerned with Vi nempt men parnosa, meaning ‘From where do we take our living.’ According to Hattie, she and the other daughters had all worked in the store “since they were 8 years old” on weekends, fishing out the herring fillets from the pickle barrels. Once each one of them finished high school, they all worked full-time. Moreover, Joel Russ kept the store open seven days a week.

History of the Bagel – A bagel is a bread product originating in the Jewish communities of Poland. It is traditionally shaped by hand into the form of a ring from yeasted wheat dough, roughly hand-sized, that is first boiled for a short time in water and then baked.

Today you can find bagels at chain restaurants and supermarkets around the world, and New York City is a big reason why. Jewish immigrants from Europe brought the doughnut-shaped breakfast breads to New York by the early 20th century. Part of the City’s appetizing tradition, bagels are most properly enjoyed as part of a morning ritual with such accoutrements as cream cheese and lox. Signature properties: Unlike other cities’ bagels, which may resemble standard rolls with holes in them, New York bagels are boiled and baked to achieve a shiny finish and chewy consistency. They’re generally lightly sweetened with malt or honey. Some fanatics are convinced you can only make them with NYC water. (From nycgo.com).

Yonah Schimmel’s Knish Bakery is a bakery and restaurant, located at 137 East Houston Street (between First Avenue and Second Avenue), in the Lower East Side, Manhattan, that has been selling knishes on the Lower East Side since 1890 from its original location on Houston Street. Yonah Schimmel was a Romanian immigrant who sold his wife’s knishes in Coney Island in the 1890s.

Today, they still make a wonderful assortment of round knishes. Our favorites are sweet potato, jalapeno and they also have a sweet / savory blueberry cheese and chocolate cheese. This iconic spot serves other New York classics like the egg cream, kugels, and latkes. A dumbwaiter, one of the oldest left in the city, brings up freshly baked goods from the basement. Original tin ceiling also!

History of the knish – A knish is a Jewish Central and Eastern European snack food consisting of a filling covered with dough that is either baked, grilled, or deep fried. In most Central and Eastern European traditional versions, the filling is made entirely of mashed potato, ground meat, sauerkraut, onions, kasha (buckwheat groats), or cheese. Other varieties of fillings include sweet potatoes, black beans, fruit, broccoli, tofu, or spinach. Knishes may be round, rectangular, or square. They may be entirely covered in dough or some of the filling may peek out of the top. Sizes range from those that can be eaten in a single bite hors d’oeuvre to sandwich-sized. 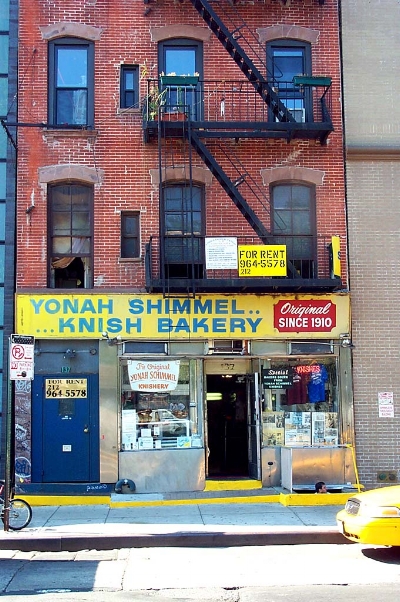