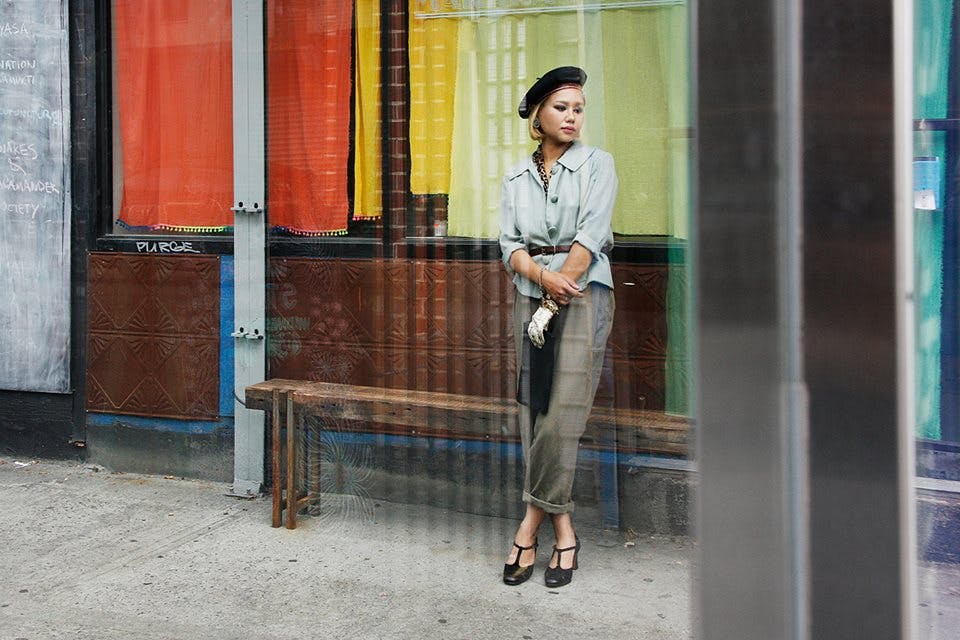 Suzanne Palmer is the founder and force behind the incredibly special vintage store, Olly Oxen Free in Williamsburg, Brooklyn. Open since 2012, Suzanne says, “I love to wave my magic wand and help you find that killer look so don’t be shy if you’re on a mission! Whether you’re shopping for a difficult girlfriend, a vampire luau, audition, or show. I have a large backstock of costumes and out of season ware, and am happy to help, just ask.” Join us on our Brooklyn Food & Fashion Tour to experience it.

Tell us a little bit about your background and how you came to open your store?

I grew up in rural Virginia in a family that only bought used clothing. I worked as an architect in Italy until moving to New York in 2007 for a position at a landscape architecture firm. A few years later I was laid off and decided to turn my almost lifelong hobby of vintage collecting into a livelihood. I had no retail experience but have been very lucky to land some great scores, loyal regular customers, and help along the way.

Can you tell us the inspiration behind the name?

When playing hide and seek, “Olly Olly Oxen Free!” is shouted exuberantly to announce that everyone is free and it’s time to come out of hiding. Fashion is one way many of us choose to come out of hiding and express ourselves uniquely. To me, it’s another way of saying “Let your freak flag fly”. 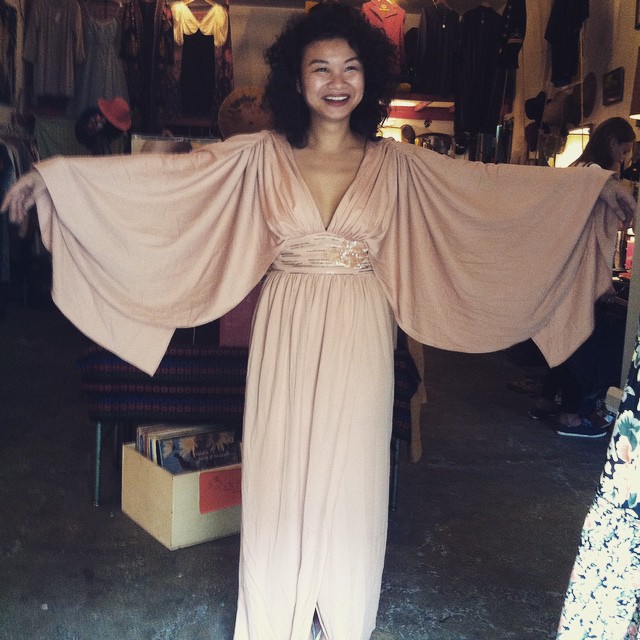 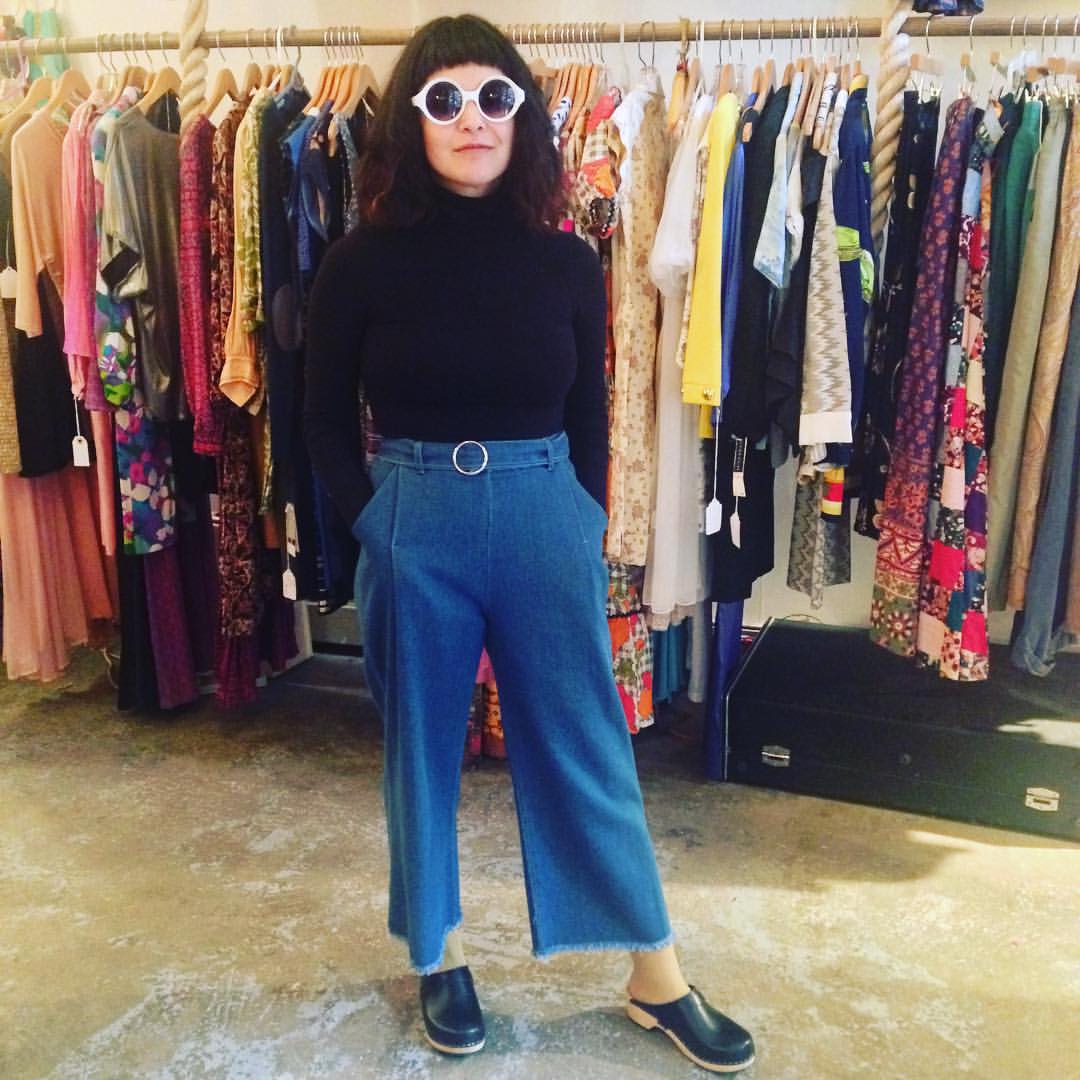 What is your vision for Olly Oxen Free?

Lots of change. The next stage for Olly Oxen Free is more personal! I have a really bright, lovely studio filled with plants, pillows, teas, and tinctures which will be open by appointment sometime this May (at the same address). There will be more styling and shoots, as well as simple ritual experiences. I have led group and private ceremonies, soundbaths, and women’s circles in the past and worked as a curandero’s helper for several years. I’m looking forward to having a more private space in which to connect, by appointment.

One phrase I hear over and over again from customers is “I wish I had the confidence to wear this”. It crushes me!  What I hear when they say that, is that they recognize some aspect of themself which they are afraid to show to the world. I want to empower everyone to be more expressive and fuck the status quo. Whether that means buying something from me, renting it, or just coming by to play dress up and try out a new look in a safe space.

I can send them home with polaroids and recipes for grounding so that they can honor that aspect of themself even if they aren’t ready to wear it out. I will also be launching the online shop, while the storefront space will continue to have some racks of vintage and also be a community space and entrance for Swans Nest Yoga, which is currently behind the shop.

What are some of your favorite pieces you’ve sold?

Definitely my collection of hand block printed clothing from 1971, which is unworn deadstock. I really wish I had saved more of the bellbottoms! They are extremely rare and hard to find, so I am always scouring the internet and shops in hope of finding them. I bought 700 pieces made by the India Imports of Rhode Island label which was sitting boarded up in Woodstock since 1971 with the original tags! I still have maybe 40 pieces left, between the cottons and the velvets. They are truly one of a kind.

I got to act alongside Phoebe Robinson in a hilarious film shot in my shop, In Case of Emergency by Stefanie Sparks (available on Amazon). I had a very tiny part but it was an unexpected and really fun experience. Amazing human/musician/customer Jared Samuel introduced Charlotte Kemp Muhl to my India Imports pieces and she and Sean Lennon ended up sourcing Olly wardrobe for their band’s music video, Animals by GOASTT (watch here). That was a really exciting moment! Other favorite celebrities who have shopped here are Kyp Malone, Mara Hoffman, and Daniel Pinchbeck– Talented souls who are making a difference on this earth.

You also host yoga classes, movie screenings and more. How did that come about?

I always knew I wanted the shop to be a multi use space. From the very beginning, we had weekly yoga classes by donation. Film screenings, Readings, Dance, Art Shows, and lots of Concerts and Parties…they happened quite naturally. Using the space in non commercial ways regularly really affects the energy of the space- the most common compliment I get from those who wander in is that it feels really good in here. I don’t think that would be the case if it was only about selling stuff.

We are all about local … can you share a few of your favorites places in NYC?

Bar Lunatico for live music, Spectacle Theater for film, Lost Horizons Night Market, Russian Turkish Bathhouse and the Desert room in the Botanic Garden, aboard any watercraft in any waterway

The Night Heron was a standout. I would say my last night on kayak crew for Duke Riley’s Fly By Night was pretty special- floating under the stars and an incredible show by sparkling pigeons I was lucky enough to help care for over a few months. It was my favorite project I have been a part of.

Anything else you want to share? Upcoming special events or collections?

Yes! We are having massive 50% off sales all March,  the band Dirty Cosmos plays a show Sunday March 24th 6pm in the shop, and we will be having giveaways too!

In May, our first appointments will begin in a more intimate space, stay tuned to our IG @oofvintage!

Enjoy a VIP visit to Olly Oxen Free with Amalya on our Brooklyn Food & Fashion Tour!