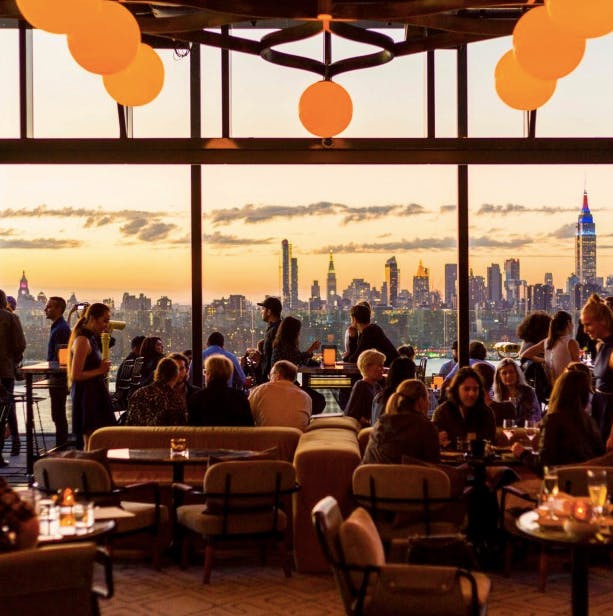 We were so honored to show the Australian Financial Review around one of our favorite neighborhoods on their quest to rooftop hop in NYC and Brooklyn.

Getting High in New York City 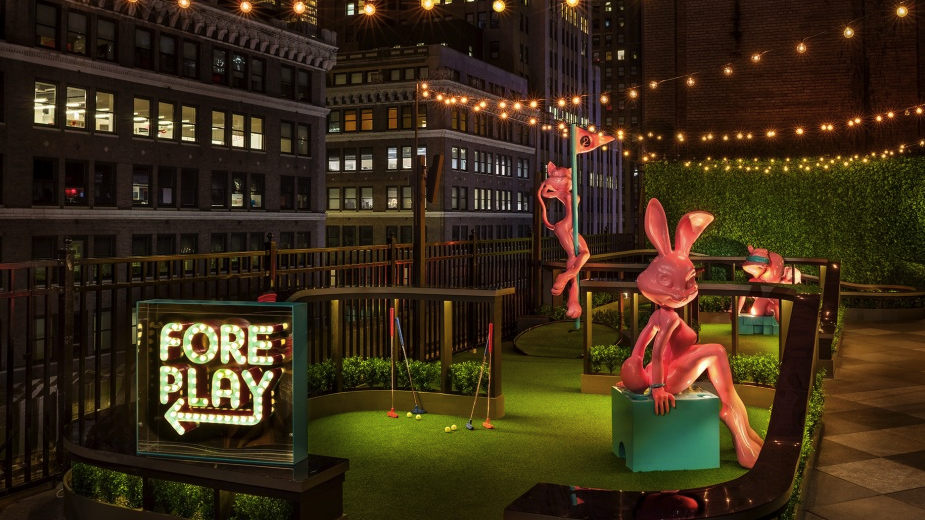 The big fish at Moxy HQ, a brand launched by Marriott in 2014, have done the sums. The new midtown hotel plans to reel the foot traffic in and up several floors by dangling on street level the ultimate New York lure: a luxe rooftop bar.

Yet as we exit the lift to the hotel’s rooftop bar, Magic Hour, I whip out my phone anyway because before me is a huge topiary bear. Oh look, over there, he has a friend. Two topiary bears! There’s a putt putt course, too, and magic mirrors. It’s 10 minutes before I clock the iconic art deco spire of the Chrysler Building frozen in postcard-perfect splendour just a few blocks over.

So it goes in popular new places where big – or big name – is being replaced by boutique. By quirk and niche. By adult playgrounds. Summiting the Empire State Building is no Instagrammable moment when the same snap is already languishing on the hard drive of everyone else. We all did the tall-buildings hustle on our first trip.

And in New York, people do assume you’ve been before. “When were you last here?” they ask. Whether the answer is two, five or 10 years, the response is the same. “It’s changed a lot since then.”

Ten years ago, of course, there was no High Line, the cleaned and greened railway line along which you can walk 23 blocks from West 34th to Gansevoort Street, through Chelsea. The first section of the elevated public part through the Meatpacking District opened in 2009. The third and final section, the High Line at the Rail Yards, opened in 2014.

It’s a mellow way to slow-walk the streets, uninterrupted by traffic lights. New Yorkers like it, too. One, a DJ, says he came here clubbing a lot in the ’90s when the area was “pretty decrepit”. He’s not a fan of “the usual gentrification, like a cafe in an old bank” but thinks the High Line is an excellent use of abandoned industrial structures.

Rooftop bars are nothing new in a city where outdoor space has always come at a premium. But they’ll never get old either. Not when new ones, served with a twist, are constantly opening with an exclusive party, a signature cocktail and a menu designed by an A-list chef. Supplied

So, yes. New York is always changing. But it is as incandescently confident as ever. Only New Yorkers would breezily claim “the whole world” can be experienced here – and mean it. When I tell a local that mashed avocado on toast is an Australian export, she throws back her head and laughs. 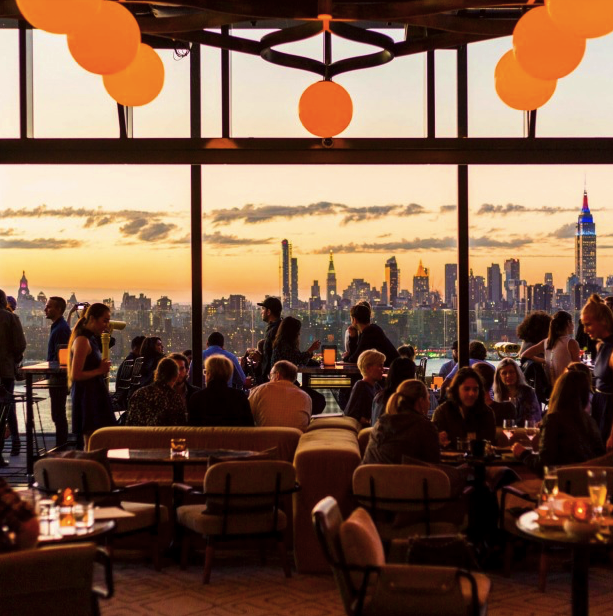 Westlight at the William Vale

Our Like A Local tour guide, Kate Fray, whisks us at a furiously fun pace between the hip nooks and crannies of Williamsburg in Brooklyn. “If you’re not happy living in New York,” she says, “it’s either because you’re fundamentally unhappy, you’re not seeking out what’s on offer or the pace doesn’t suit you.” Case closed.

Rooftop bars are nothing new in a city where outdoor space has always come at a premium. But they’ll never get old either. Not when new ones, served with a twist, are constantly opening with an exclusive party, a signature cocktail and a menu designed by an A-list chef.

My sales assistant in Michael Kors’ palatial Madison Avenue store protests when asked for her favourite. “That’s like asking for my favourite restaurant … or shoe. It’s New York. There’s a bunch.” Her colleague is more forthcoming. Le Bain, he says (on the High Line), or Brass Monkey (next door).

Increasingly, they are the must-have feature in hot new hotels. For guests, it means an easy stroll from bedroom to beverage-with-a-view – a huge plus when you fly in on an evening flight. I arrive at Newark airport from Sydney in good shape due to United’s comfortable economy-plus seats, but until I’ve slept properly I’d rather soak in Manhattan’s honking streets from up high.

Within 10 minutes of checking in to Chinatown’s new Hotel 50 Bowery, I’m spinning in slow, delighted circles in its 21st-storey rooftop lounge, The Crown, as sunset turns the skyline shimmering gold and pink. The hotel borders the Manhattan Bridge and its view extends to Queens and New Jersey.

It’s a magical way to capitalise on that just-landed disorientation you’d otherwise fritter in your room. Though I don’t stay long. The Crown’s dress code is “downtown chic” – only in New York could that phrase fly – and my aeroplane outfit isn’t cutting it among a bevy of stylish young New Yorkers with angular hairdos.

Westlight bar at William Vale Hotel in Williamsburg – where the players play. If they book a month in advance, that is. Nicholas Doyle – nsdoyle.com

“People are only just realising that to see the Manhattan skyline you have to leave Manhattan,” says Britt Hijkoop, of tourism and trade company NYC & Company. The best place to see it? Westlight in Williamsburg, where the players play. If they book a month in advance, that is.

Reservation confirmed, we sail in to the glass-walled bar on the 22nd floor of the William Vale Hotel. A line of sharply dressed hopefuls do not. Getting rejected while wearing heels, on a Sunday afternoon – what gives? “Sunday Funday is big in Brooklyn,” Hijkoop says.

Some have pulled up in luxury cars. Residents, perhaps, of the exclusive Manhattan apartment block 200 11th Street, where cars are parked in garages adjoining the living space. This I discover on architectural tour of Lower Manhattan, taken by water on a vintage-style yacht. “Why do people bring their cars up?” I ask the guide. “Oh, you don’t want the valet tooling around with your Lamborghini,” he says.

Back at Westlight, meanwhile, our waitress wears liquid eyeliner of such startling shades, a photographer asks to take her picture. “Sure,” she says, then strikes a series of knockout poses. “Is she a model? I think she’s a model,” we confer as she walks away holding her tray – and head – high.

Stevie Wonder at the Global Citizens Festival in Central Park in September deejaed a private party after his gig, giving Moxy patrons more than they bargained for. MediaPunch Inc / Alamy Stock Photo

Some older couples, dressed more comfortably, are scattered on Westlight’s wraparound terrace. They stand out like houseplants in a greenhouse full of flowering succulents. Guests of the hotel?

Pitting the sleepers against the partiers is a balancing act for hotels with rooftop bars. When I return to the Moxy late on Saturday night, an employee dances me into the foyer. It’s fun until I realise I can hear the rooftop revelry in my room, too. The next day I discover it was Stevie Wonder deejaying a private party after his gig in Central Park.

All is forgiven. This city will do that: turn its aggravations into “only in NY” moments. “That’s another reason I love New York,” Sex in the City’s Carrie Bradshaw once famously said. “Just like that, it can go from bad to cute.”

I wouldn’t call the cacophony of car horns, steaming hot subways and swarms of people at peak hour “cute”. Exhilarating, yes. Worth returning for, again and again – absolutely.

Exclusive NYC: the inside track

Crowds are excruciating when you’re trying to view art. But with a revolving door of high-profile exhibitions, currently including Auguste Rodin, Edvard Munch and David Hockney, New York’s Metropolitan Museum of Art is a must-do even on repeat trips. Especially if you can avoid the crush with an exclusive private tour.

You’ll need to be an early riser: the sought-after EmptyMet tours run from 8.30am until 10am. A specially selected guide will lead you through the highlights of the city’s most visited museum before the doors open to the public. Your ticket includes same-day admission to The Met Fifth Avenue, The Met Breuer and The Met Cloisters. Book at least two weeks in advance at [email protected]

Open for breakfast, lunch and dinner – if you have an invitation, that is. Classified restaurant entrance at Newark Airport. David DuPuy

If you don’t fancy the early start but don’t do queues either, continue past the Met’s main stairwell entrance to a door marked The Uris Centre For Education. It’s an under-appreciated exit and entrance so you’ll skip the line. Even better, there’s a coat check on entry and toilets nearby. If it’s shoulder to shoulder inside, and you’re done dodging people’s #artselfies, the Met’s rooftop bar serves French wine. If you’re lucky there will be a concert in Central Park next door and you’ll be able to hear every beat and bar.

Only in New York – in fact, only at Newark airport – will you find this private, invitation-only restaurant. Classified is marvel of service, secrecy and convenience. It was launched by United last August but it’s so well hidden, its profile is sure to remain low.

Unlike the airline’s first- and business-class lounges, you can go only if you’ve been invited at the discretion of United. It’s surreal leaving busy Newark airport behind to be ushered through a secret door and down a dimly lit corridor. In the small, bright restaurant on the other end, however, comfortable leather chairs await.

A drinks menu including Dom Pérignon and 10-year aged sake may calm nervous flyers. We have prosecco and a platter of raw seafood including salmon tartare, clams and east coast oysters. There is a grill for steak, the breakfast menu keeps things pretty simple, and if you just want a fresh salad, there are plenty to choose from.

Charging docks at each seat and a close-up view of the runway don’t let you forget where you are, though the attentive servers ensure you make the most of your time. They know what time you fly so you’ll be dined and wined until you need to leave for your gate. And if you haven’t managed to squeeze in dessert, they’ll give you something packaged to go.

Open for breakfast, lunch and dinner – if you have an invitation, that is.

Kate Hennessy was a guest of NYC & Co and United Airlines.