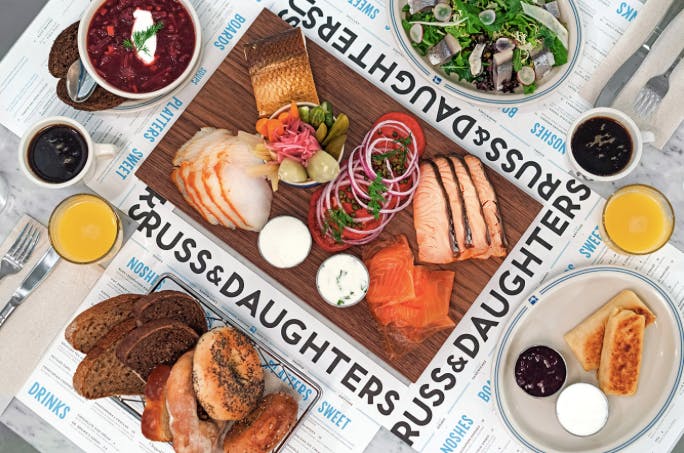 Who runs the world? GIRLS! Who runs Russ and Daughters? ALSO GIRLS! We love the story of this traditional bagel and white fish store, which is a point of interest on our Lower East Side tour, but where as most people know it for being delicious, most don’t know that it has been recognized by the Smithsonian Institute as the first business in America to be registered as ‘and Daughters’, rather than and Sons.

First opened in 1914 (around the corner on Orchard St. The East Houston St location has been in effect since 1920), Joel Russ wanted to sell the best bagels and appetizings to the densely packed neighborhood, filled with many people from Eastern Europe looking for the tastes of home, just like him. Having worked his way up from lowly street trader, he was determined that the business was a success, and in part that meant being open 7 days a week. And as soon as his 3 daughters could see over the counter, he set them to work. 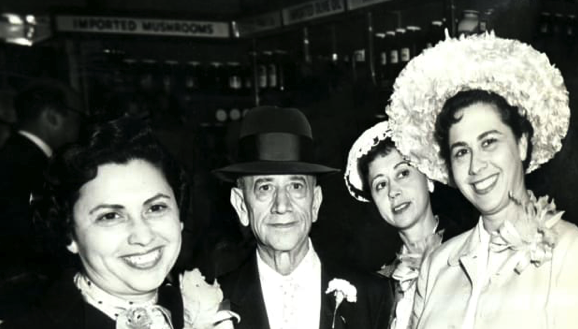 Hattie, Ida and Anne – known locally as The Sturgeon Queens, were to Russ and Daughters as a schmear is to an everything toasted. Working full time from their teenage years, it didn’t allow for much of a social life.  Whilst other girls their age were stepping out with eligible young men, the Russ Daughters were spending their days arm deep in smoked salmon and cream cheese. Joel trained them not only in how to serve up the best pareve, but also how to run the business successfully. These 3 sisters were a formidable team, helping their father grow the finances, and in 1935 to some controversy he re-registered the company name to RUSS AND DAUGHTERS, the first of its kind in the United States.

Customers were travelling from all over to take advantage of the superior quality produce. But there were also a few young men who would come more and more often, simply to be with the daughters themselves. Over time Hattie, Ida and Anne would find love amongst the herring and get married. That didn’t mean they walked away though! Instead of the ladies leaving the business to raise children as was the norm, they brought their husbands – and then their own children, into the shop too! In 1975 When Hattie and Anne (Ida had since passed) were finally ready to retire, their children took over, some leaving other lucrative careers, to keep the family name going.

Less than 1% of American businesses make it to the 4th generation, but thanks to the fortitude of these women, Russ and Daughters has now done just that with cousins Niki and Josh, direct descendants of the Russ family, at the helm. You can get food to go at the main location at 179 East Houston St, sit down for a bit more at the café at 127 Orchard St, get a snack at their counter in The Jewish Museum (1109 Fifth Avenue), and later this year they will open a new storefront at the Brooklyn Navy Yard.

To hear more about the daughters’ lives (and loves!) You can watch the documentary series’ The Sturgeon Queens and The Jews of New York, both by PBS, or bring a piece of the LES home with a copy of Russ & Daughters: Reflections and Recipes from the House That Herring Built.

You can join Like a Local Tours and pay homage to the great girls on our Lower East Side / New York Immigrant Food tour. For smaller private parties, we can also include a stop / order /eat as part of the experience. For more information email our own Boss Babe Lauren, and make sure you mention Russ and Daughters!