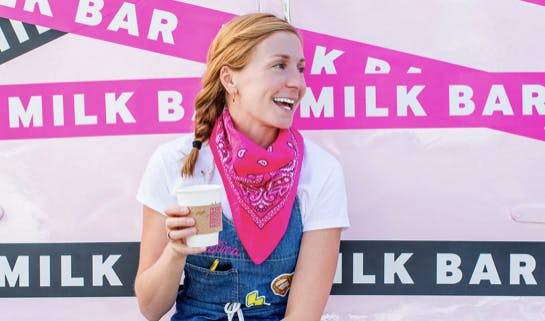 The old saying went ‘behind every great man is an even greater woman’. Well we may have gotten to know Christina Tosi from her work with mega chef David Chang, but she was never in the shadows. Starting with her fingers firmly OUT of the pies, Christine has a built a sugary empire that spans the globe and is often the number 1 pick for our guests on our Williamsburg Brooklyn Food Tour.

Hailing from Ohio but raised primarily in Virginia, Christina started out as far away from food as you could imagine: Electrical Engineering. She then went to Italy to see if the translator life was for her, finally making her way to New York where she enrolled in the French Culinary Institute Pastry Arts Program and boy, are we ever grateful!

You would think it was a direct line from there to TV stardom, but Christina has never walked the straight path. She went to work at some of the most respected fine dining restaurants in New York but building their Hazard Analysis Plans. She was eventually introduced to David Chang but wrote his Food Safety Plans and coordinated with the NYC Department of Health. Not quite as exciting as inventing Cereal Milk Ice Cream, but David saw her true potential and asked her to run the Momofuku pastry program. He didn’t actually have a dessert menu at the time so given free rein, Christina started to play.

Milk Bar came along in 2008. People where already going nuts for her restaurant creations, so it seemed only natural that a sweet specialty shop was on the cards. Christina took her unique twist on childhood favorites and made them available to all. Left over milk in the cereal bowl? Let’s turn it into ice-cream! Scraps of chips, pretzels, chocolate and caramel? Compose cookies! Ever wondered what the ‘O’ in the bagel could be? Bagel Bombs! The richest treat in the world? Crack Pie! Want something super meta? Birthday cake flavor birthday cakes! She invented unique cookies, truffles, wedding cakes, shakes and soft serves. Why not check out the menu here-

There are now nine stores in New York, plus three in DC, one in Vegas, one in Toronto, LA and now Boston. You can purchase her cook books and ingredients online and in stories so you can join the likes of other Boss Babes such as Chrissy Teagan and enjoy Milk Bar at home. Christina is a judge on Master Chef and Master Chef Junior, plus is featured in an episode of Chef’s Table on Netflix. She’s been a guest on many shows, one of her most memorable being Conan where they went crazy with a hammer and left-over candy. She has TWO James Beard awards, was nominated one of Fortune Magazine’s 40 under 40, and has a proprietary line at Target. Boss Babe doesn’t even begin to cover it. She is the dessert QUEEN.

You can join Like a Local Tours and sample some of her goodies on our Williamsburg Bites Brooklyn food tour, which runs 3 days a week. For more information email our own Boss Babe Lauren, and make sure you mention Milk Bar!