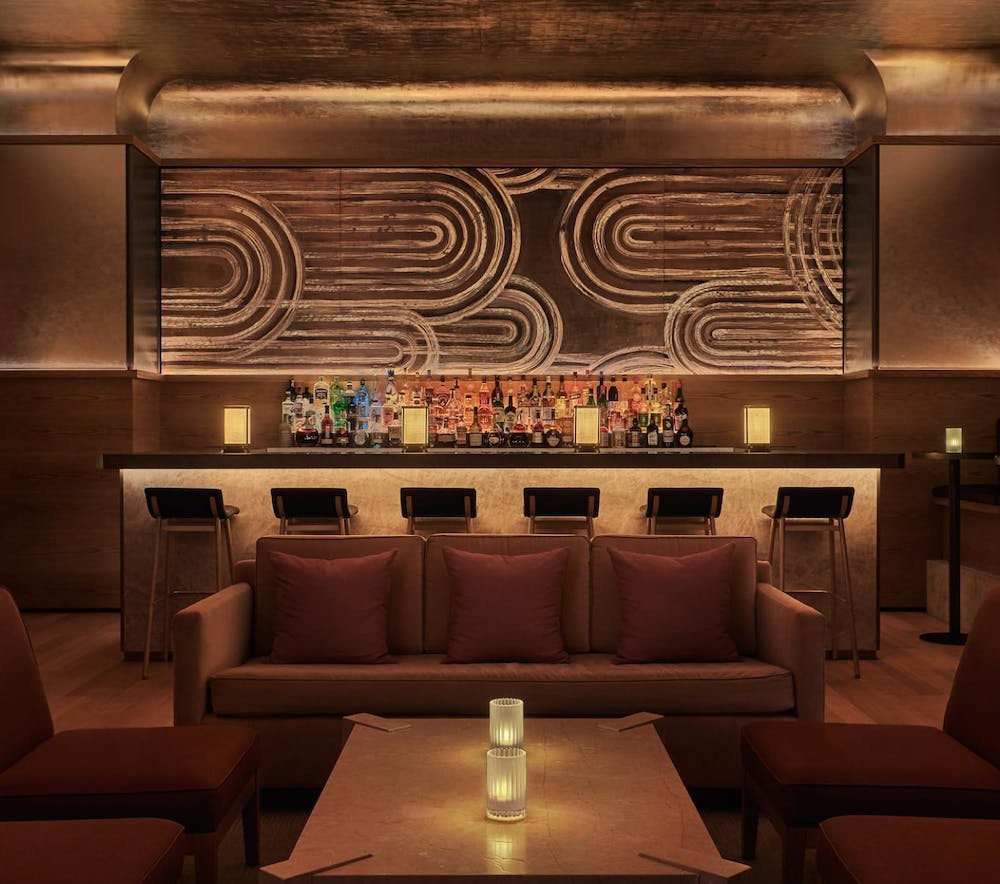 A recent article in the NY Times titled “Why Gen Z Is Flocking to New York’s Old-School Hotels and Bar” caught our attention. They go on to say, “Bemelmans Bar now has bouncers. And at the Rainbow Room, a post-punk after party.” A good martini bar is always on trend for us!

“Nothing says old school New York glamour quite like a dressed-up night spent sipping martinis. And if the flash photos flooding our Instagram feed recently are any indication, it appears the cool kids of the city are revisiting the classic sip in full force. Whether you like yours shaken or stirred, extra dirty or with a twist, these are the poshest spots to hit for a quintessential martini moment (complete with excellent people-watching).” — Guest of a Guest

Piano bars are also having a serious moment, so we wanted to round up our favorite martini and piano bars in NYC! 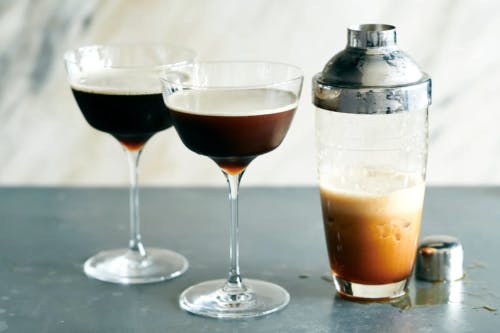 Plus, the espresso martini is back! YUM! Read more and find a great recipe towards the end of this blog post. 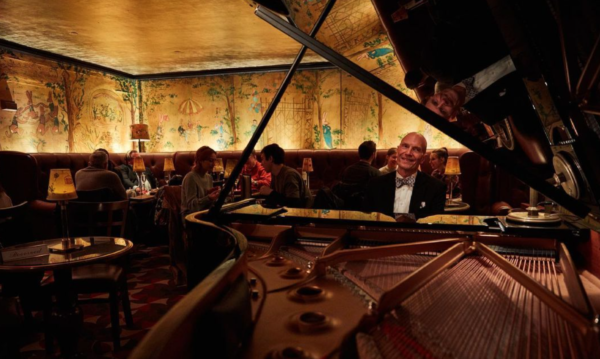 A true New York classic, this high society haunt at The Carlyle is no doubt the most glamorous spot to sip martinis uptown with a side of live jazz and piano music.

SOME HISTORY: Madeline is the heroine of the children’s books by Ludwig Bemelmans, the German-born artist who also painted the walls of his now namesake bar. Robert Huyot, the French-born general manager of the Carlyle in the 1940s, was friends with Bemelmans. He asked him to paint the new bar in exchange for rooms at the hotel. Bemelmans and his family lived at the hotel for 18 months. The bar was named for the artist and has been iconic since it opened in 1947. Although Bemelmans consulted with Huyot, he was given free rein to paint what he liked.

Reopened in Oct 2021. Loved by celebrities! Add some caviar to any martini on the menu. Yum!

Temple Bar served up martinis, mood lighting and a downtown version of uptown glamour until it closed on New Year’s Eve in 2017. Temple Bar’s name and its Art Deco-ish green décor remain the same, but the space has been fully redone. Also remaining in place is the skeletal chameleon bar logo and still the only clue that 332 Lafayette Street contains an elegant bar. 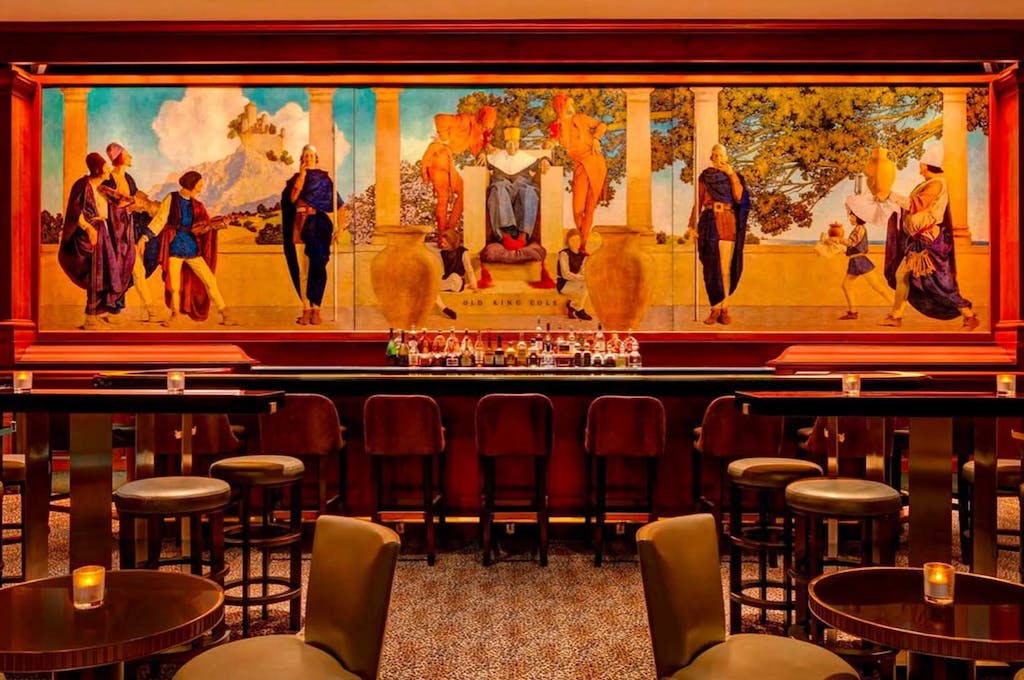 The St. Regis hotel’s legendary bar (that claims to have invented the Bloody Mary), but picture wood-paneled walls, cozy candlelit tables and soft jazz playing in the background.

Head into the basement of the iconic Solow Building in Midtown Manhattan. A winding, red-carpeted staircase leads to a gold-plated cocktail bar, a large dining room with gigantic booths and a circular piano lounge that connects the two. Feels like sipping cocktails in a 1960s airport lounge. If it’s good enough for Carrie Bradshaw, it’s good enough for me.

Order up the famous Vesper (or any other martini iteration) at Ralph Lauren’s sceney hot spot. Extra olives are a given.

Don’t forget to head upstairs to check out the bar – even if they’re full, ask for a quick tour. Trust, it’s worth it! 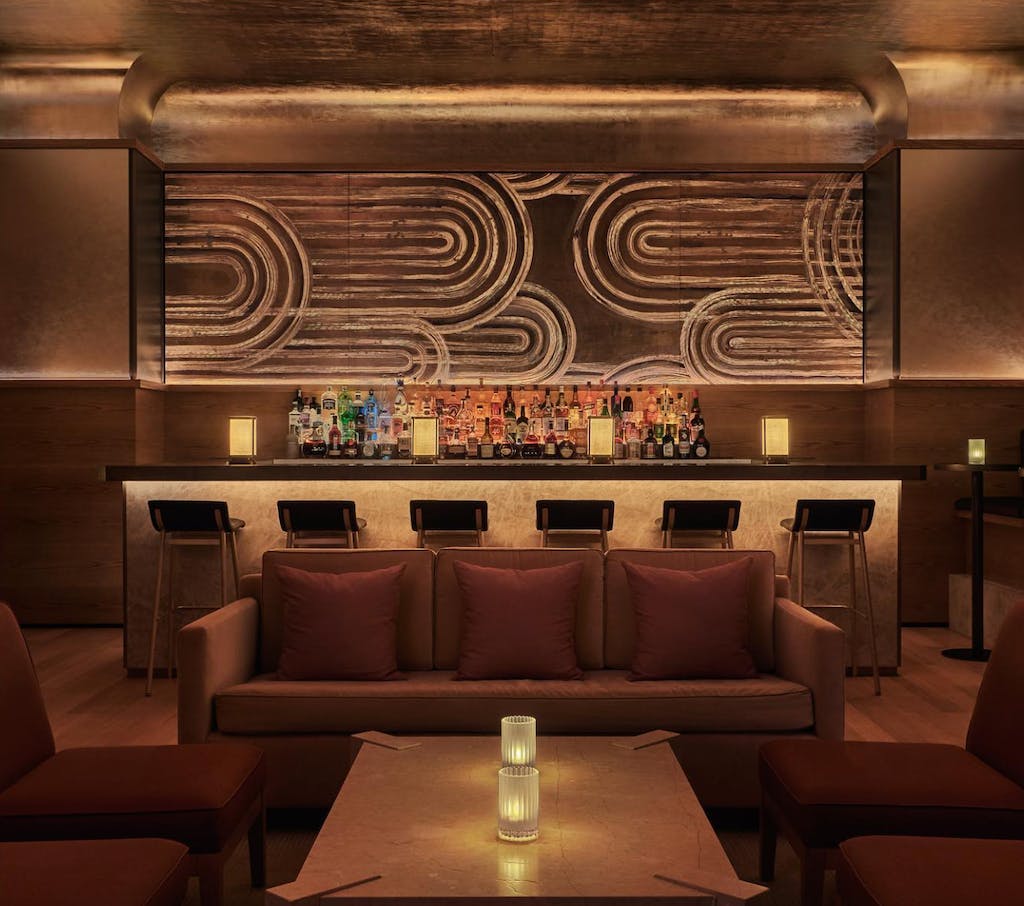 Whether you’re looking for a luxe staycation or an elegant nightcap, slip into the richly designed lobby bar at the recently opened Pendry Manhattan West for the perfect martini and serving of caviar beneath the arresting wall installation by New York based abstract painter, Nancy Lorenz.

History of the espresso martini 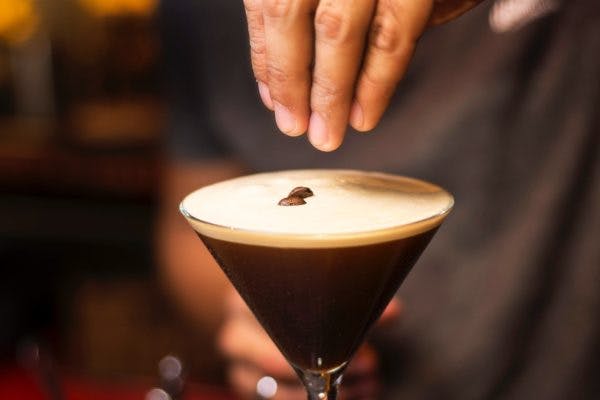 Here is the most widely accepted history of the espresso martini, according to GQ Magazine:

Way back in the booze-soaked haze of Soho in the early 1980s, bartender Dick Bradsell had an epiphany. Combining coffee, vodka and coffee liqueur, Bradsell created the first Espresso Martini and the Soho club scene would never be the same again. The bartender would find himself at the centre of Britain’s fledgling cocktail industry, working at (to name but a few) Fred’s Club, The Colony Room Club, Soho Brasserie, The Groucho Club, The Zanzibar, The Atlantic Bar & Grill and Damien Hirst’s Pharmacy, and over the 1990s, the cocktail would go from being a niche creation enjoyed by Bradsell and his confidants to become the mascot of London bars and members’ clubs, as American cocktail and European coffee culture took root in the capital simultaneously. A heart-stopping blend of caffeine, alcohol and sugar, by the turn of the millennium the Espresso Martini was the emblematic drinks order of choice of Young British Artists, Britpop stars, supermodels and gossip-column hacks alike.

Like all great heroes, its origin myth is shrouded in mystery. Bradsell allegedly whipped it up on the spot using old grounds from a coffee machine for a model, long rumoured to be Naomi Campbell or Kate Moss, who stalked into his bar and asked for “something to wake me up, then fuck me up”. The truth is – happily – more muddled than a Mojito, but the Espresso Martini is capable of delivering on both fronts and remains wildly popular.

Why do we garnish an Espresso Martini with 3 coffee beans?

This is the cocktail’s trademark and are said to represent health, wealth and happiness and come from the traditional serving of Sambuca in Italy, where the beans are called con la mosca, which means “with the fly”.

The espresso martini is a simple cocktail that can be made with just three ingredients: vodka, Kahlua (or another coffee liqueur) and espresso. Vodka is the spirit of choice here because it’s tasteless and mixes well with other liquids. Kahlua is an Irish coffee-flavored liqueur with a hint of chocolate, which makes it a perfect match for this drink. The espresso provides the body of the drink.

How to make an espresso martini

Sugar syrup to sweeten to taste

Mix the ingredients together in a shaker full of ice and shake hard for 30 seconds. Strain into a Martini glass, you should get a nice froth on top which you can garnish with coffee beans.

From Eataly to NYC’s best bagel, this tour is enough food for lunch with incredible history and architecture along the way. Recommended by Fodor’s! Tour runs Wed, Fri, Sat & Sun 10:30am-1:30pm.