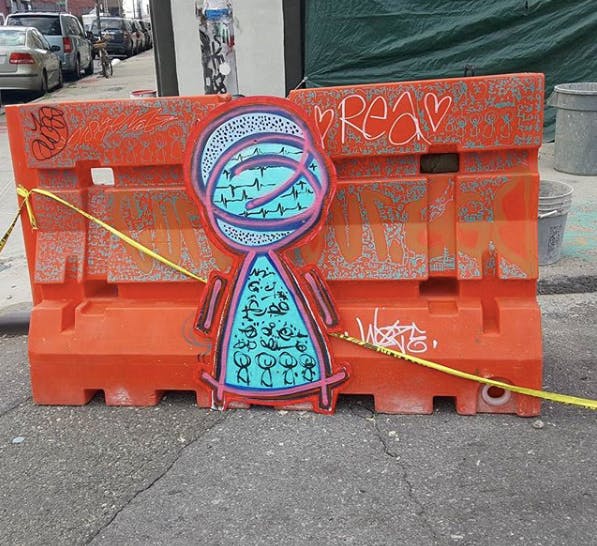 We are excited to introduce you to Espartaco, a talented and exciting Brooklyn-based artist and creator of the Nozco. We were first introduced to him in Bushwick, where his studio is located. We are proud to announce that he is heading up our special Brooklyn graffiti experience / workshop and is also part of our Insider Art Tour of Bushwick. We hope you enjoy reading this article as much as we had fun sitting down with Espartaco and unearthing it over tostadas in Bushwick:

Can you give us a bit of info about your background?

I am originally from Venezuela. I studied industrial design in Italy because it wasn’t acceptable to my family to be an artist. Even though I was always painting since childhood. After Italy, I moved to Connecticut, to work at the University of Connecticut, and then I moved to NYC where I was a cultural attache for the Venezuelan Consulate for many years.

I decided to move to Berlin to pursue being a full time artist. This was late 90’s to early 2000s and then I moved back to NYC until 2009. In 2009 I moved to Venezuela and was practicing and teaching art until 2016 when I moved to Brooklyn.

Thanks for that info. I personally like to understand a little bit about the artist’s background while diving deeper into their work. We have discussed before the image that is so prevalent throughout your work, this stick figure, Nozco. Can you tell us about him?

Nozco comes from imagery and writing that I was doing over the years. I started recognizing the character and giving preference to the character in my work. In 2002, I tried painting just the Nozco character and it proved very difficult. During the process, the character allowed me to explore other techniques. Through that process I felt the need to take him out of the canvas and make him three dimensional and then I was also able to use him in groups for installations.

From the beginning, Nozco does not represent any gender. He’s a representation of a human being done in a childish way. And that comes from my experience with my own children. The human being can be pure and at our purest moment is when we are children.

I know that you didn’t start out as a street artist. How did that come about for you?

It started when I was in Berlin. Street art is an inspiring playground. I started using the streets as a natural progression of the character {Nozco}. I made stickers of Nozco and started placing them around. It was a bit of a shy way to stat interacting with the street.

Doing street art is also when I really started appreciating other street artists. I love how the art interacts with the colors and textures of the streets. Everything is there for something to happen. And sometimes its pure luck in terms of finding a perfect composition.

The character allows me to place it around the streets as if it’s traveling around. Using a character while doing street art allows more freedom because it’s a fast process so you can complete it before they catch you. It’s also fun to see the photos that people share of themselves interacting with the art.

So there are definitely two sides to your work — the studio and the street?

Yes. I also incorporate found objects. I sometimes take things into my studio and paint them and then put them back.

I started using found foam in Berlin to create the Nozco. And when I moved to NY the intention for the Nozco’s started to be stronger. Since they are like children to me, it feels like I am taking children from the street into my studio.

With mountains of leftover foam in the studio, I began to shape the foam into stones. One by one I continued, sort of absentmindedly, to create the 3D stones.

The stones have been an element in my work since 2002. The stones represent obstacles that we carry or face along the way. I created a piece using my daughter’s play toy and bottle nipples and the foam — to represent the mother. I put all the stones and the Nozcos around the object honoring the mother.

What do you like about living and working in Bushwick?

I am inspired everyday. Both by the neighborhood and by the other artists in close proximity. There is a sense of community. Murals and art everywhere. I knock on the doors of other artist’s studios to say hello or for material. I see them in the hallway. This interaction has allowed me to open up.

I am always finding ways to collaborate which is a very inspiring and creative process. Nozco has given the opportunity for me to ask other artists to incorporate it into their work, as a collaborative effort. It challenges the other artists and allows them to get out of their comfort zone. Then they find things to incorporate back into their work which is very satisfying for me. I really enjoy how they interpret and use Nozco.

This is also a huge boost for my productivity. I can stay for days and weeks in my studio working. Then when I venture out after these periods, everything is like a new world and the creative cycle just continues.

Thank you so much for your time Espartaco. I can’t wait to see your next project!

Being in his studio is quite magical and it’s a bit like being inside his head. We implore you to join us and experience Espartaco’s world. Come meet Nozco and see the flying potatoes!