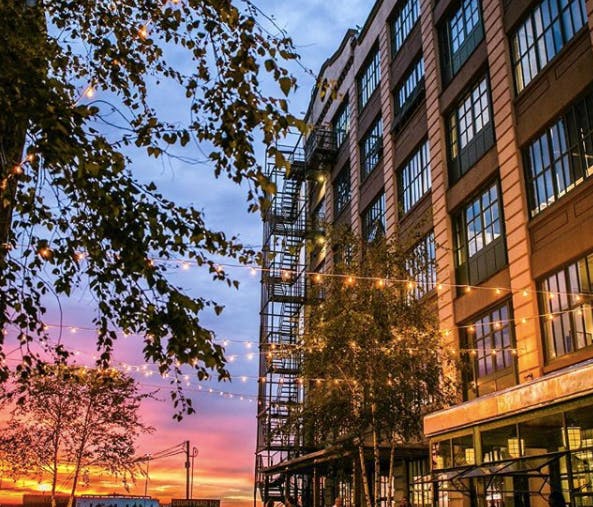 You might have heard about Industry City in Sunset Park, Brooklyn’s 3.5 acre, 6 million square foot mixed used complex with amazing restaurants, shops, artist studios, co-working spaces and more. We were lucky to have been give a tour of the entire campus and we can’t wait to share what we learned.

Industry City was originally built in 1906 on the Brooklyn waterfront, so it served as an industrial site. Over the years, as manufacturing left, it continued to decline. In 2013, the property was acquired by the same developer as Chelsea Market. They turned the complex into a stunning design, tech, media and food hub.

TAKE A TOUR OF INDUSTRY CITY WITH US

There is so much to see at Industry City. Let us do all the work. Plus, you’ll get insider access. Go behind the scenes with us at The Brooklyn Kitchen, Wanted Design, Extraction Lab Coffee, Li-Lac Chocolates, Brooklyn Brine, a high end milliner (made to measure hats) and more!

Click here for more info on taking a tour of Industry City with us.

If you go on your own, here’s what to see:

ABC Carpet, Design Within Reach Outlet, the IC Store by Wanted Design which features items made at Industry City (in the upstairs studios and offices), Mitchell Gold + Bob Williams and more

SO MANY but our favorites are: Avocaderia, Frying Pan, Brooklyn Brine (amazing vegan food at their shop), Bangkok Bar, Taco Mix. For dessert: One Girl Cookies or Blue Marble Ice Cream

Outdoor mini golf, corn hole, ping pong and table shuffleboard – if you can find it 😉

It’s really easy! 3 stops from Manhattan. Take the D, N or R train to 36th Street in Brooklyn. It’s literally 2 blocks from there (walk under the BQE).

It started in the 1890s when Irving T. Bush began to build a monumental intermodal manufacturing, warehousing and distribution center in Sunset Park, Brooklyn. Due to its prominent location, immense scale, and structure that supported a wide spectrum of businesses, Industry City (then known as Bush Terminal) flourished. It quickly became one of most successful facilities of its type, employing nearly 25,000 workers per day and enabling Brooklyn to become a major international seaport.

By the 1960s, urban manufacturing had started its long decline. Most of Industry City’s major manufacturers – most notably the legendary Topps Baseball Card company – closed their doors or moved away, and Industry City suffered through a period of disinvestment and decay for 40 years.

In 2013, this all changed. A new ownership group, led by Belvedere Capital and Jamestown, began to redevelop Industry City. Over the past two years, Industry City has leased more than two million square feet of space and created over 2,000 jobs, capitalizing on the rapidly emerging innovation economy. It encompasses the full arc of physical, digital and engineered product design and development, including initial research, engineering, design, manufacturing, and production. Once again, the property fulfills its purpose as a thriving center of commerce and local employment.