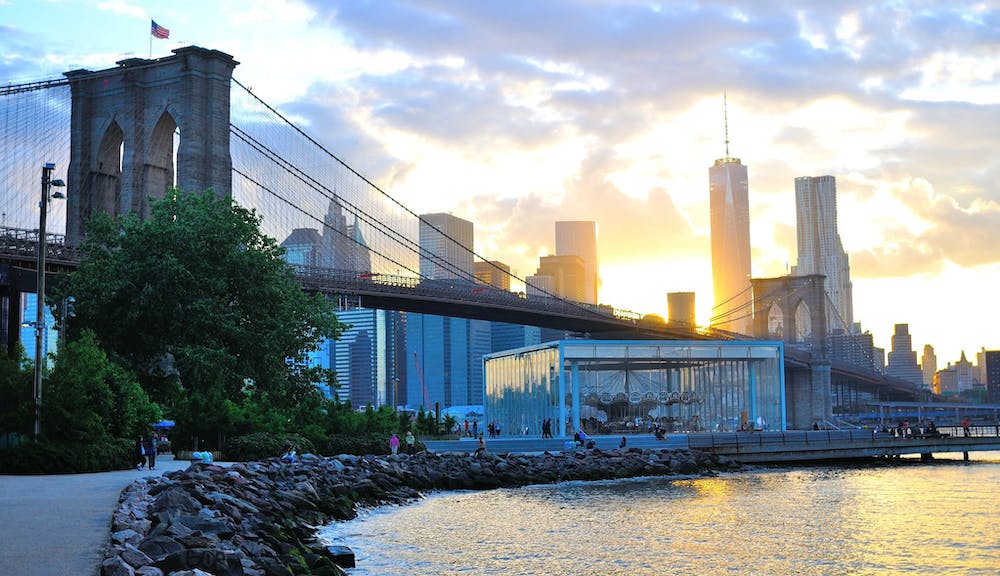 Did you know that Brooklyn is the 4th largest city in the US (if you separate it from New York City)? The borough has experienced an explosion of popularity in the last 10 years and is now on most tourists’ must do list when they come to New York City. Let us help you see this amazing borough! 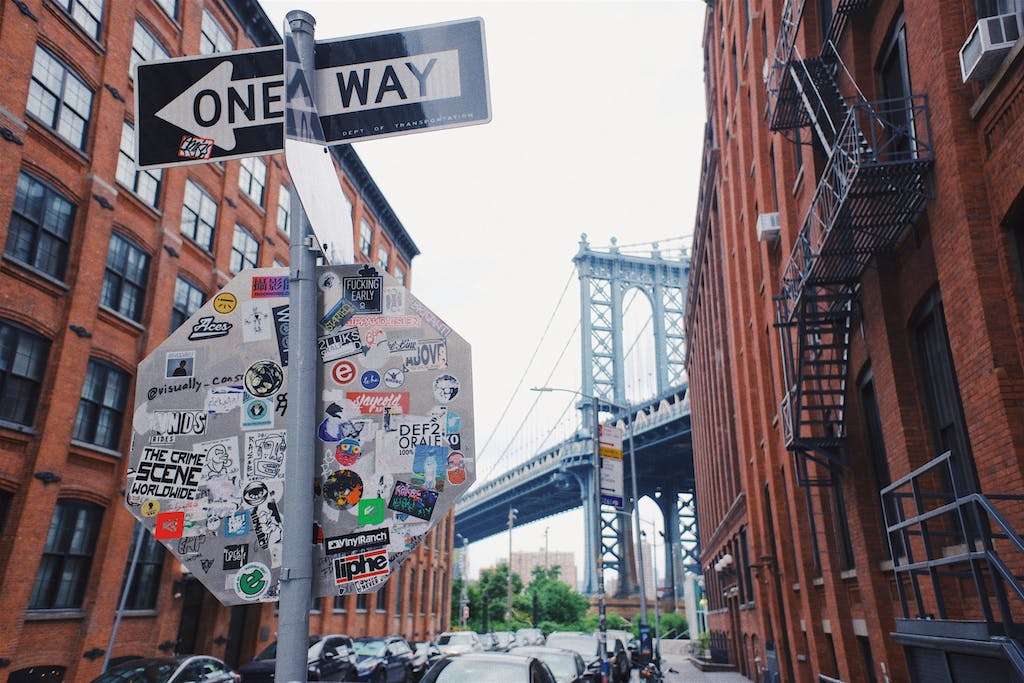 But Brooklyn is sprawling, how do you decide what neighborhoods to visit in the borough? There is so much to see and do, let us take some of the guess work out for you! Book our Brooklyn Heights, Brooklyn Bridge, and DUMBO Food Tour, now available as a public tour at 11am on Saturdays starting July 30th!

Let our expert guides bring Brooklyn Heights to life through storytelling and history; enjoy delectable food from 5 different restaurant stops between Brooklyn Heights & DUMBO; walk off all those delicious calories with a walk across the Brooklyn Bridge post tour if you like.

Did you know that Brooklyn Heights is known as the first historic district in the United States? Our guides know all the hidden gems, fascinating stories, and unbelievable facts to bring the neighborhood to life for you. You’ll quickly get a sense of why it is one of the most beautiful neighborhoods in NYC. It has breath-taking views of The Statue of Liberty, Lower Manhattan skyline and The Brooklyn Bridge. During your tour you’ll learn about historical landmarks such as The Promenade. According to the NY Harbor Parks website, it is one-third of a mile long, it offers a vista of the Statue of Liberty, the Manhattan skyline and the majestic Brooklyn Bridge. Lined with flower beds, trees, benches and playgrounds, the promenade is a favorite destination for tourists, joggers, strollers, families and lovers. You’ll also visit Montague Street, one of NYC’s oldest commercial streets with plenty of local shops and restaurants to explore. 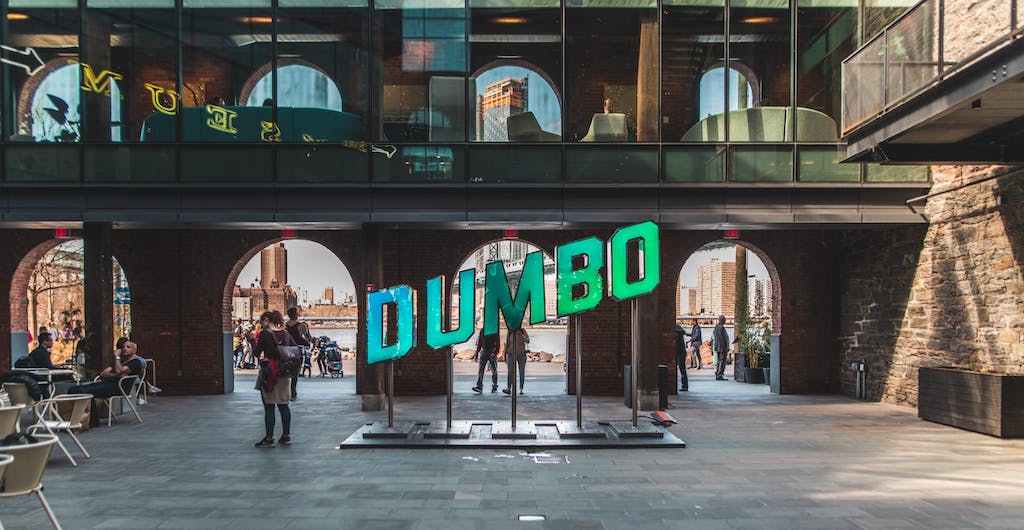 Next you’ll make your way to the trendy DUMBO neighborhood. Depending on who you ask, DUMBO stands for Down Under the Manhattan Bridge Overpass or Down Under the Manhattan and Brooklyn Overpasses. The Manhattan Bridge is just blocks away from the Brooklyn Bridge. The neighborhood was once a ferry landing, filled with industrial and warehouse buildings. In the late 20th century it was bought by developers who turned it into the residential and commercial community it is today. Art galleries flocked to the new development creaking a haven for beautiful work to be displayed, which you can still find today. Recent development has led to more and more tech companies calling DUMBO home.

Before the tour ends you’ll get a chance to check out Jane’s Carousel. Jane’s Carousel (formerly Idora Park Merry-Go-Round) is a carved, wooden, 48-horse carousel that was built in 1922 for the Idora Park amusement park in Youngstown, Ohio. When Idora Park closed to the public in 1984, the carousel was bought at auction by Jane and David Walentas (real estate developers largely created with creating the DUMBO & Brooklyn Heights we know today) and moved to Brooklyn, New York for restoration. It was opened to the public at its new location in Brooklyn Bridge Park on the East River in Brooklyn on September 16, 2011. Rides are only $2, making for a great afternoon activity! 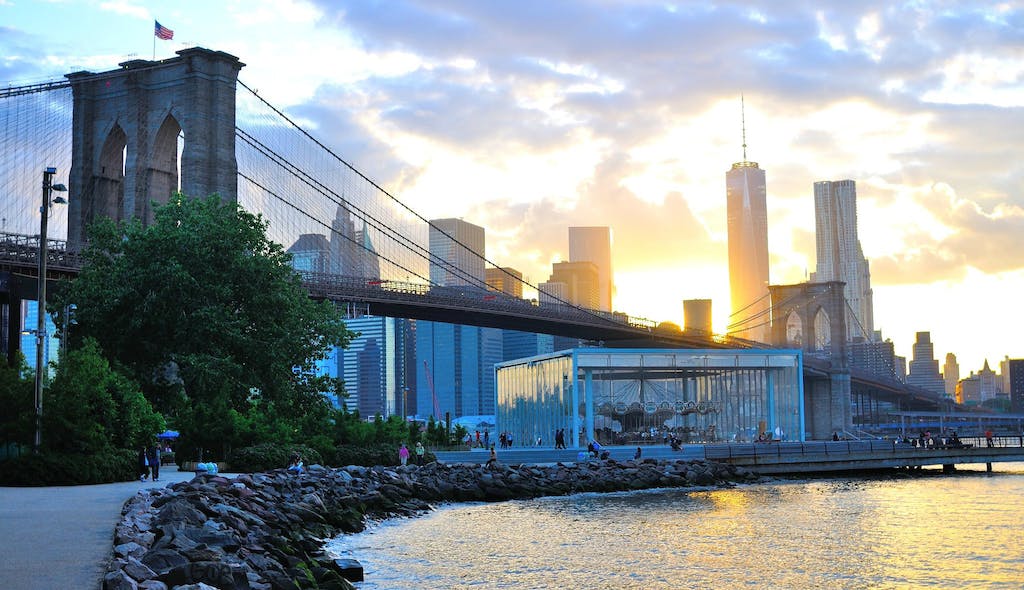 In both neighborhoods, we walk along tree-lined streets where you can learn about the famous people who have lived in these areas like Truman Capote and Norman Mailer. You will also see incredible architecture from the past 200 years including some of the city’s most stunning brownstones. You don’t want to miss this beauty! 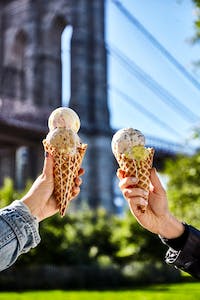 When it comes to food—you can expect to try a variety of foods that are uniquely New York; pastries from old world deli Lassen + Hennigs, pizza from world famous Julianna’s, a sweet treat from famed chocolatier Jacques Torres, Tacos from local favorite Los Tacos Al Pastor, and a scoop of ice cream to top it all off from Oddfellows. Come hungry because it is more than enough food for lunch! This tour is great for vegetarians! 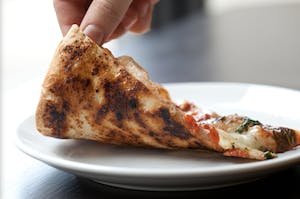 Your guide will end the tour by pointing out the direction to the entrance to the Brooklyn Bridge if you decide you’d like to walk across it to Manhattan on your own. You should plan to spend around an hour getting from one side to the other, including time for photographs. Don’t forget to look up a little history along the way. Helpful tip: there are two lanes in the pedestrian pathway of the Brooklyn Bridge — one for bicycles and the other for pedestrians. Make sure you stay in the correct lane to avoid a collision!

Did you know that Peregrine falcons nest on top of the 262-foot-tall towers of the Brooklyn Bridge? Peregrine falcons are capable of reaching speeds over 200 miles per hour. They are the fastest animals on record. Due to DDT poisoning, they disappeared from the eastern United States, but the pesticide was thankfully banned in 1972 and they have made a comeback. The birds thrive in New York City. They nest on skyscrapers, bridges, and other buildings where they hunt pigeons, rodents and other birds. According to the Department of Environmental Conservation, New York City may now have the largest urban population of peregrine falcons anywhere. 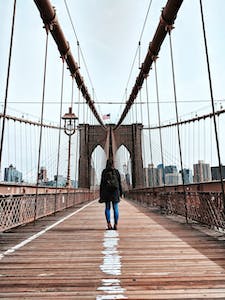 This tour has been one of our most booked Private Tours for years, and we are excited to be bringing it to the forefront of our public tours.

We’re thrilled to be able to offer this incredibly popular tour on Saturdays starting July 30th at 11 am!

You can book online by following this link!

Eat and shop your way through the best of eco-friendly Brooklyn with a local expert. Don’t let the city grit fool you, we’re living green right here in the middle of the borough!