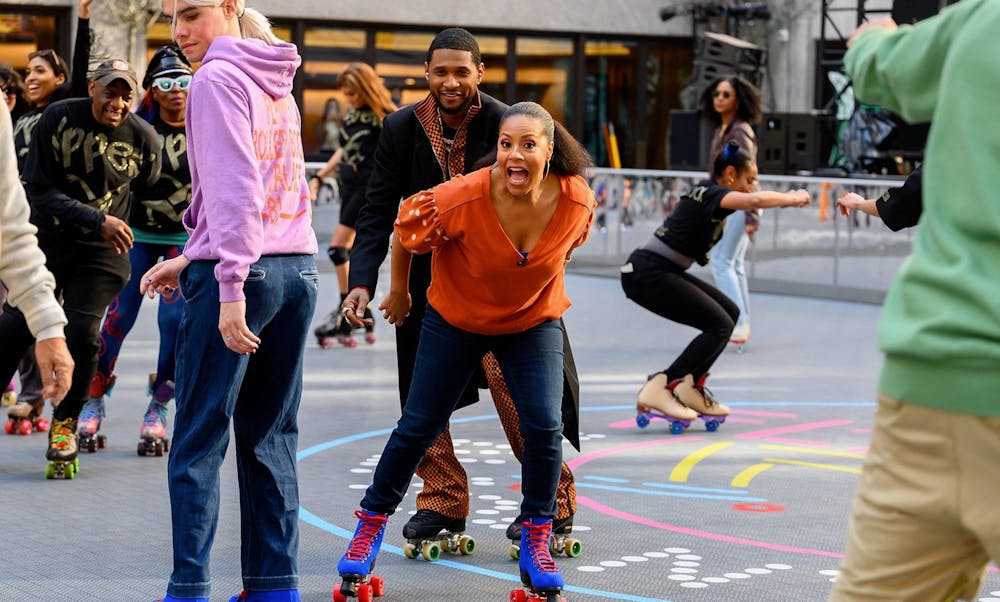 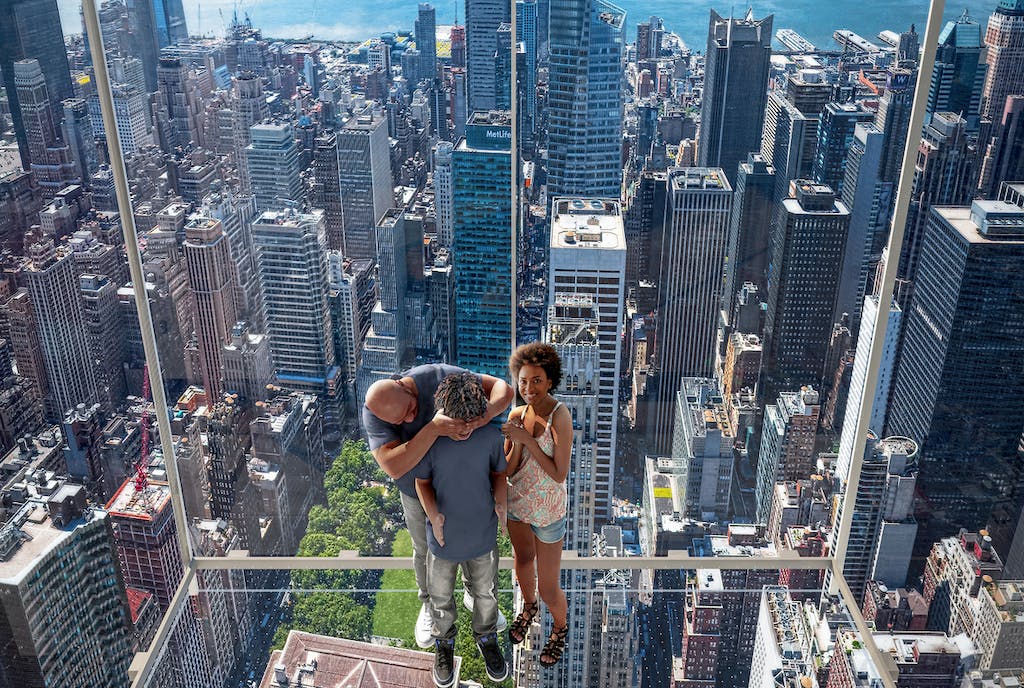 SummitOne Vanderbilt is the new 67-floor One Vanderbilt super-tall—a 1,401-foot-high—skyscraper. As the city’s fourth-tallest building after One World Trade Center, Central Park Tower and 111 West 57th Street, it is just west of Grand Central Terminal, where you first enter the experience underground. After a trip through a mirrored hallway with its own immersive elements, visitors take an elevator up to the 91st floor, where they’re 1,000 feet over the streets and sidewalks of NYC. Kenzo Digital has created a totally mirrored infinity room called “Air” that reflects the sky and city views over and over, making you feel like you’re walking in the sky or on another plane of existence.

RISENY places thrill-seekers inside a 180-degree, 40-foot projection dome that plays 8K aerial footage to create the sensation of flight. (The ride is similar to Disneyland’s “Soarin’ Over California” experience.) The experience begins with a film by documentarians Ric Burns and James Sanders—narrated by everyone’s fave actor Jeff Goldblum—that touches on NYC’s history, specifically Times Square and its global impact. Then visitors are taken to a re-creation of the city’s first subway station at City Hall circa 1904, which transforms into a fully immersive theater with visual and special effects. Eventually, a present-day subway car virtually transports guests to the galleries. While on the subway car, riders see NYC’s vibrant pop-cultural evolution through seven themed galleries— “Finance,” “Skyline,” “TV/Radio,” “Fashion,” “Music,” “Broadway” and “Film”—that show off historic artifacts, star-studded memorabilia. Once they get through the galleries, visitors are finally whisked into the air, where they’ll “soar” around NYC’s landmarks (a rendering shows the Statue of Liberty) to a soundtrack with songs like Taylor Swift’s “Welcome to New York” and Frank Sinatra’s “Theme From New York.” The full motion seats will dip, turn and soar while wind, mist and scents are blown at riders’ faces. 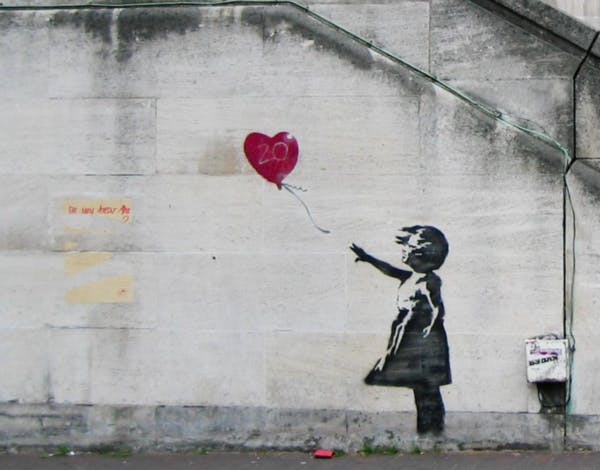 Banksy – building castles in the sky. This exhibition is an imposing event that brings together more than 100 original works and objects by the British artist known as Banksy, in a collection that gives an account of his entire production: twenty years of activity that begin with the paintings of the very first phase of his career, up to last year’s results with the works from Dismaland. Banksy’s imagery is simple but not elementary, with messages that examine the themes of capitalism, war, social control and freedom in a broad sense and within the paradoxes of our time. Opened May 28 at the former International Center of Photography Museum: 250 Bowery, New York.

Whitney Biennale. The Biennial is back. April 6 – Sept 5, 2022. The Whitney Biennial has surveyed the landscape of American art, reflecting and shaping the cultural conversation, since 1932. The eightieth edition of the landmark exhibition is co-curated by David Breslin and Adrienne Edwards. Titled Quiet as It’s Kept, the 2022 Biennial features an intergenerational and interdisciplinary group of sixty-three artists and collectives whose dynamic works reflect the challenges, complexities, and possibilities of the American experience today. 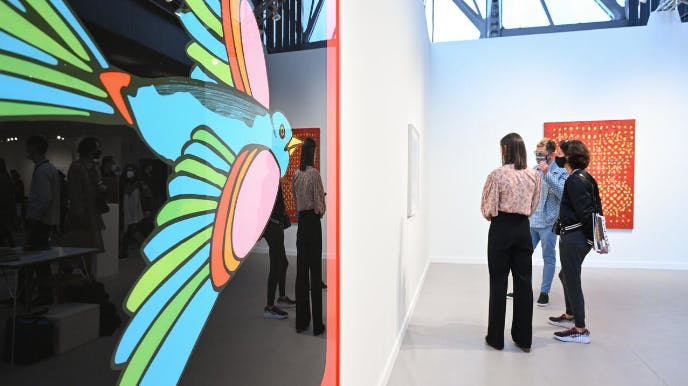 The Frick Madison is now at 945 Madison Avenue—the former home of the Whitney Museum of American Art and the Met Breuer—while Henry Clay Frick’s mansion undergoes a massive renovation. This new stint will last two years, and while the Brutalist building by Marcel Breuer is a huge departure from the Gilded Age mansion, the space is offering a much different and rare look at the collection, according to museum officials. Unlike at the Frick Mansion, the Breuer building is a clean slate—stark in contrast, which actually helps to attract the viewer’s attention to individual works. Eyes aren’t busy looking at ornate furniture here. It’s all about seeing the smaller details in the artwork that you might have overlooked at the mansion. According to Anna-Maria and Stephen Kellen Director Ian Wardropper, “It’s a different Frick than you’ve ever known.”

Museum Mile Festival. June 14th, As the name suggests, the Museum Mile Festival is a mile-long celebration of art and culture. The annual festival is geared towards letting people experience special art collections amassed from various museums along Fifth Avenue in New York. During the event, visitors can enjoy artistic masterpieces that stretch over 20 blocks.

Little Island. Little Island at Pier 55 is an artificial island park in the Hudson River west of Manhattan in New York City, adjoining Hudson River Park. Little Island covers 2.4 acres (0.97 ha) and is supported by 132 pot-shaped structures (called “tulips”) suspended above the water, which in turn stand on 280 concrete pilings extending into the riverbed. The park has various lawns, paths, and plants, and there is a small stage and three concession stands, as well as a 687-seat amphitheater. It’s connected to Hudson River Park by footbridges at 13th and 14th Streets. 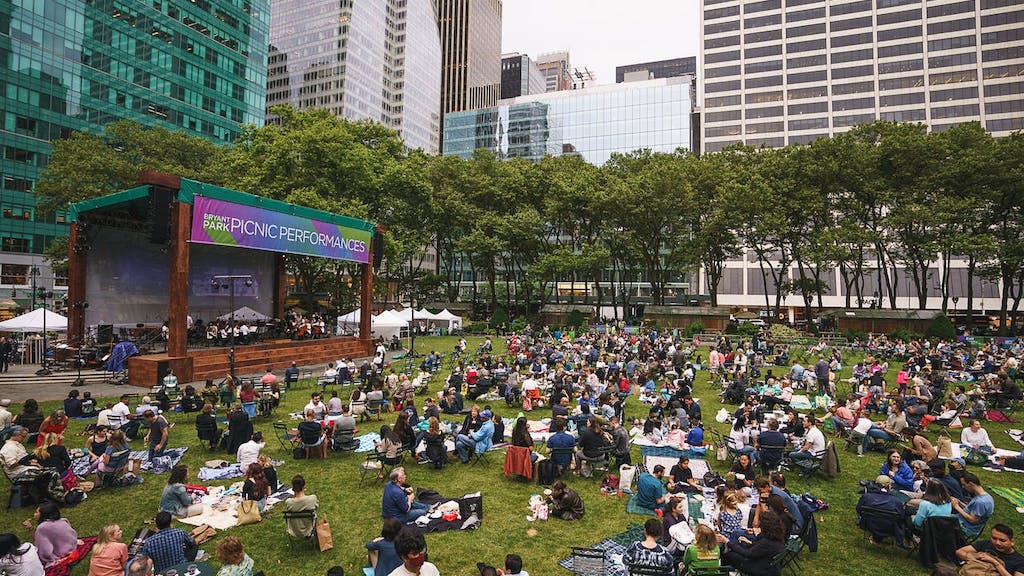 May 27th kicks off the 2022 season of Picnic Performances: twenty-six live and in-person music, dance, and theater events produced in partnership with a diverse and storied lineup of New York City’s performing arts institutions. Over 20 of this season’s events will also be available to livestream in their entirety.

June is Pride Month and NYC is full of Pride Events all month long! Check out this guide to NYC Pride!

(all descriptions from ny.eater.com)

The Commerce Inn: Visit Website. One of the West Village’s most prominent dining duos, Jody Williams and Rita Sodi, have unexpectedly torn a page from the playbook of the Shakers — a religious group rooted in Christianity and founded in upstate New York in the 1770s — for their follow-up act to neighborhood favorites Via Carota and Bar Pisellino. At the Commerce Inn, the menu takes its cues from century-old rural American recipes, honing in on simple plates like beans and pork belly, spoon bread, and smoked cod cakes. In the adjoining tavern, find a vodka cocktail with beet tincture, milk punches, and wines from upstate New York purveyors.

Jing Fong: Visit Website. Jing Fong, one of New York City’s great dining landmarks, has returned to Chinatown — in a downsized format. The gigantic dim sum restaurant, where diners once ascended on an escalator to an 800-seat dining room, was forced to shut its doors early last year. Nearly a year later, it has rebooted in a slightly less freewheeling 130-seat space. Fried turnip cakes, shrimp shu mai, and other dim sum favorites are still here, but the menu also includes some new additions, like a crispy crab fried rice, geared toward sit-down dinners.

Check out this handy guide! SOMETHING TO DO ALL 99 DAYS OF SUMMER

As always, be sure to visit NYC Go for a complete list of the goings on in NYC as well as several excellent guides such as 28 Fun Things to do in Central Park or The Asian Experience in NYC.